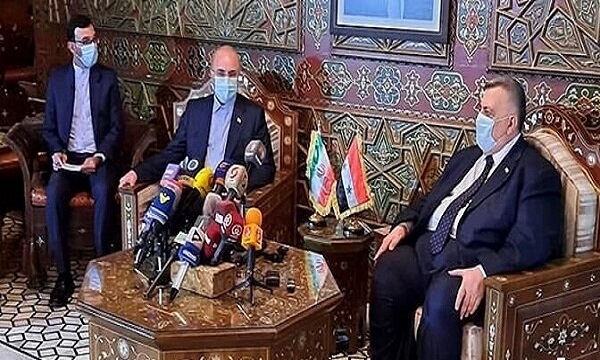 He made the remarks upon his arrival in Damascus Airport late on Tue. and reiterated that comprehensive trade and economic agreement between Iran and Syria will pave suitable way for better activity of the two countries’ public and private sectors in post-war era, rebuilding Syria and taking advantage of trade interests between the two countries.

In a joint conference with his Syrian counterpart Hammoudeh Sabbagh Speaker of the People's Assembly of Syria, Mohammad Bagher Ghalibaf said, “I take this opportunity to express my heartfelt congratulation for the success of Syrian people for participating in the elections and their special emphasis on safeguarding and stabilizing Syrian land and territory.”

Expressing his satisfaction with the end of war and insecurity in Syria, Ghalibaf said that this insecurity and war on terror against Syria was carried out with the support of the United States but today is the beginning of a period of reconstruction and economic upsurge in Syria.

Syrian Parliament Speaker, for his turn, congratulated the visit of Iranian Parliament Speaker Ghalibaf to Syria and stated that the amicable ties between the two countries are strengthened, longstanding and deep rooted and it is hoped that this visit will further stabilize and strengthen good relations between the two countries.