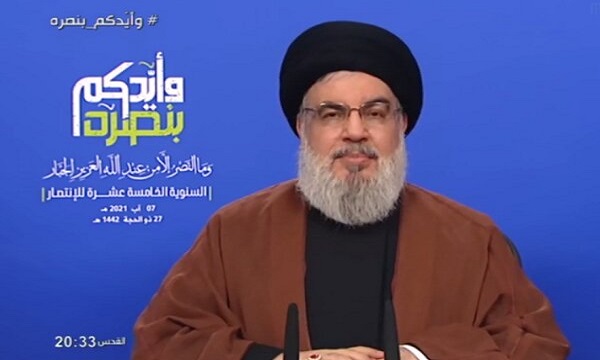 August 14 marks the end of the brutal Israeli aggression on Lebanon in 2006, which started on July 12 of the same year. Throughout 33 days, Resistance fighters heroically confronted the Israeli aggression, Al-Manar TV website has said.

At the start of his speech, Nasrallah offered condolences to families of victims martyred in southern Beirut shooting incident recently.

He said that in 2006 the entire world ganged up on the Resistance but the resistance forces triumphed.

Nasrallah called on the resistance forces to preserve achievement of victory in the 33-day war.

According to him, the first major responsibility today is to maintain achievements secured by the Resistance.

The martyrs in the 33-day war want the continuation of the resistance, Hezbollah chief said.

He further pointed to the importance of security, saying that without security there will be no economy.

He added that the resistance forces were able to achieve deterrence against the Israeli enemy after the victory in the war.

Nasraallah said that the Israeli enemy is now scared of confrontation with resistance forces and does not war now.

Hezbollah leader said that since the hostilities were ceased on August 14, 2006, the Israeli enemy has not staged any aerial aggression against Lebanon thanks to balance of deterrence.

Nasrallah further added that the Israeli enemy is unable to prevent the resistance forces from becoming stronger.

He noted that the Israeli enemy fears escalation with the Resistance, adding that Israeli officials are now voicing concerns over the Zionist entity’s existence.

He also described the Israeli airstrikes on Lebanon on Thursday as a very dangerous development, stressing that the Israeli estimation was that this aerial aggression would go unanswered.

Later, he pointed out that Iran enjoys capability, strength and courage to defend itself, adding that Tehran does not need any allies.

Nasallah said that the rocket firing on Friday was an appropriate response to the Israeli airstrikes.

The retaliation on Friday was fully-considered as it held several clear messages, according to Nasrallah, adding that Friday’s retaliation was aimed at maintaining rules of engagement that the enemy attempted to change.

He added that the Friday rocket firing was a direct retaliation to the Israeli shelling and airstrikes.

Nasrallah further vowed that the Resistance stands ready to defend against any foolish act by Israel.

He added that any Israeli airstrikes will be responded to in an appropriate manner.

The Hezbollah secretary general also thanked all those who voiced their support for Resistance’s right to retaliation.