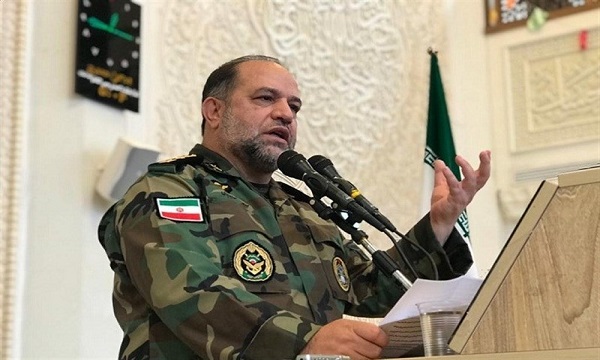 Brigadier General Saeed Shabanian, Deputy Coordinator of Iranian Defense Ministry made the remarks in his meeting with Russian Deputy Ministry of Defense Colonel General Alexander Fomin in Moscow on Tuesday.

While congratulating the successful holding of the International Military and Technical Forum ARMY 2021 in Russia, Shabanian stated that the Armed Forces of the Islamic Republic of Iran, in addition to hosting several sports, including scuba diving, Sea cup and Lords of Weapons, will participate in military competitions that will be held in other countries such as Russia.

“We are happy that relations and cooperation between Tehran and Moscow are at the highest level thanks to the will of high-ranking officials of the two countries,” he emphasized.

Elsewhere in his remarks, Shabanian pointed to the fight against regional terrorism and stated that Iran and Russia have had a successful experience in the fight against terrorism, extremism and destruction of ISIL in Syria both in regional and international arenas.

Fortunately, these successful experiences brought Iran and Russia closer to a common understanding and perspective on regional issues and developments than ever before, he stressed.

He then thanked Russian Federation for declaring its position and support in lifting Iran's arms embargo in the UN Security Council (UNSC) and said that it is a matter of happiness that cooperation between the two countries' defense ministries has followed a positive path in recent years.

It is hoped that increasing meetings and consultations between defense and military officials of the two countries will greatly help strengthen mutual trust and increase the level of interactions and cooperation between the two countries, Brigadier General Shabanian added.