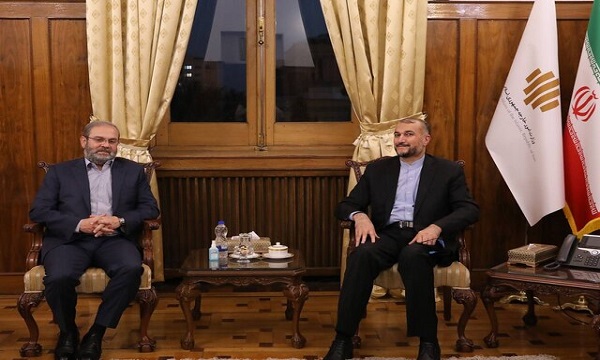 He made the remarks in his meeting with Lebanese Hezbollah Resistance Movement’s Representative in Tehran Seyed Abdullah Safi al-Din in Tehran on Wed. and emphasized evermore expansion of relations between nation and government of Islamic Republic of Iran and Lebanon.

During the meeting, Iranian Foreign Minister Amir-Abdollahian congratulated the nation and government of Lebanon for formation of new government in this country and expressed hope that problems facing Lebanese people would be resolved as soon as possible.

The government of Islamic Republic of Iran under presidency of Seyyed Ebrahim Raeisi pays due attention to supporting the Resistance movement in Lebanon, Amir-Abdollahian added.

He considered the dignified resistance of Lebanese people against Zionist enemy and Takfiri elements as a source of pride and honor for all nations of the region and freedom seekers.

Lebanon’s Hezbollah Resistance Movement’s representative to Tehran, for his turn, said that Lebanese people and government are grateful to the Islamic Republic of Iran for supporting Lebanon at the time of difficulties and hardship.

He expressed hope that Islamic Republic of Iran would go through stages of growth, development and prosperity in all fields.