Russia-Ukraine live updates;
Zelensky ready for dialogue with Putin, Kiev says
TEHRAN (Defapress) - On the fourteenth day of the Russian special military operation in Ukraine, Moscow has announced a humanitarian ceasefire in Ukraine on Wednesday morning to carry out the evacuation of the civilian population.
News ID: 83926 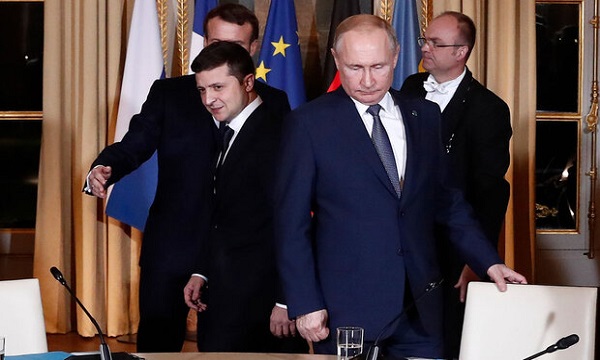 Two weeks after Russia launched a military operation in Ukraine, President Volodymyr Zelensky said that he is ready to “discuss” and “find compromises” for the status of the Crimean Peninsula and other separatist territories.

Zelensky has once again repeated his plea for the United States and its Western allies to secure his country’s airspace by imposing a no-fly zone. The Ukrainian president also said that he believed US President Joe Biden “can do more” to stop the war.

Despite Zelensky’s plea, Washington and its NATO allies oppose creating a no-fly zone in Ukraine. They say such a move could lead to “full-fledged war in Europe.”

Britain also said on Tuesday that it will phase out imports of Russian oil and oil products by the end of 2022.

Ukraine’s President Volodymyr Zelensky has given a historic virtual address to British MPs. The Ukrainian president pushed for more Western action against Russia and called for humanitarian aid. “Do what you can, do what you must,” he said.

Deputy Head of the Ukrainian Presidential Office Igor Zhovkva said that Kyiv is ready for a diplomatic settlement of the conflict in Ukraine and direct talks between the presidents of Ukraine and Russia, Volodymyr Zelensky and Vladimir Putin.

Speaking in an interview with Bloomberg, the official said that direct talks between Zelensky and Putin are essential "to stop this horrible war."

He stressed that Kyiv's major conditions for such talks are a ceasefire and withdrawal of Russian troops from Ukraine.

Russian President Vladimir Putin and German Chancellor Olaf Scholz discussed the situation in Ukraine and humanitarian issues during a phone conversation on Wednesday, the Kremlin said.

"President Vladimir Putin had a phone conversation with Chancellor of Germany Olaf Scholz ... In addition, special attention was paid to the humanitarian aspects of the situation in Ukraine and the Donbas republics," the Kremlin said in a statement.

Putin told Scholz about efforts to organize humanitarian corridors in Ukraine and attempts of militants to block evacuation of people, according to the Kremlin.

Ukrainian president has accused Russian forces of carrying out a “direct strike” on a hospital complex in Mariupol that reportedly houses maternity and childrens wards.

“People, children are under the wreckage,” Zelensky tweeted, calling the attack an “atrocity”.

Trudeau said during a visit to Berlin that Ottawa will be able to start sending the “highly-specialised” equipment, including cameras used in drones, “in the coming days”.

He acknowledged that there were challenges in terms of getting equipment securely into Ukrainian hands, but said Canadian officials were “working through that”.

German Chancellor Olaf Scholz has ruled out sending warplanes to Ukraine after the United States turned down an offer by Poland to transfer its Russian-made MiG-29 jets to a US base in Germany, with a view to them then being passed on to Kyiv.

“We have provided all kinds of defence materials and .. have sent weapons that we have told you about but it is also true that we have to consider very carefully what we do concretely, and definitely warplanes are not part of that,” Scholz said at a news conference in Berlin.

He was speaking alongside Canada’s Trudeau, who is on a diplomatic tour of Europe.

European Union governments are preparing a new round of travel bans and asset freezes on about 100 Russian nationals over Moscow’s attack on Ukraine, the bloc’s foreign policy chief has said.

"We need to continue increasing pressure through the options that we have. Member states are working on a new package of sanctions that involves around 100 people responsible at different levels of government more economic sanctions. I hope that this package will be adopted before the end of this session today," Borrell said.

China to provide $791,540 worth of humanitarian assistance to Ukraine

Russia reducing use of US dollar: Foreign ministry

Russia is reducing the use of the US dollar in foreign exchange reserves and external settlements against the backdrop of strengthening sanctions, switching to non-Western capital markets, Dmitry Birichevsky, the head of the Russian foreign ministry's economic cooperation department, told Sputnik.

The diplomat noted that the Russian economy almost permanently exists in conditions of increased sanctions risks. Russia's domestic market and foreign economic relations are gradually adapting to changing circumstances — the country has the necessary margin of safety to carry out the appropriate transformation of the economic development model and adjust the financial policy.

The Russian defence ministry has said it has obtained secret documents which prove that Ukraine planned a March attack on Donbass in eastern Ukraine.

"In the course of a special military operation, secret documents of the command of the National Guard of Ukraine came into the possession of the Russian military. These documents confirm covert preparation by the Kyiv regime of an offensive operation in Donbas scheduled for March 2022," said the official representative of the Russian Defence Ministry, Major General Igor Konashenkov.

The UK has unveiled new aviation sanctions giving it the power to detain any Russian aircraft and banning exports of aviation or space-related goods to Russia, according to Al-Jazeera.

The UK will also strengthen its ban on Russian aircraft, making it a criminal offence for any to fly or land in the UK.

Lavrov to hold talks with Ukrainian counterpart in Turkey

Russian Foreign Minister Sergey Lavrov is scheduled to fly to Turkey where he will have talks with his Ukrainian counterpart Dmytro Kuleba, on Wednesday to take part in the Diplomacy Forum in Antalya, Russian foreign ministry spokeswoman Maria Zakharova said.

Russia says it has taken control of Zaporozhskaya NPP

Russian National Guard says the situation at Zaporizhzhia Nuclear Power Plant in southeastern Ukraine is under its full control.

An air alert has been declared in and around Kyiv, with residents urged to get to bomb shelters as quickly as possible.

Viktor Orban, Hungary’s prime minister, has opposed a ban on Russian oil and gas, saying it “would represent a disproportionately large burden” for his country.

“While we condemn Russia’s armed offensive and we also condemn the war, we will not allow Hungarian families to be made to pay the price of the war; and so the sanctions must not be extended to the areas of oil and gas,” he said in a statement.

The UN human rights office says at least 474 civilians have been killed in Ukraine since the Russian attack on the country began.

Another 861 have been wounded, it said, adding that the real figures were likely considerably higher as reports of hundreds of casualties from the towns of Volnovakha, Mariupol and Izium are yet to be corroborated.

“Most of the civilian casualties recorded were caused by the use of explosive weapons with a wide impact area, including shelling from heavy artillery and multi-launch rocket systems, and missile and airstrikes,” it said.

The United States has rejected Poland’s offer to send its MiG-29 fighter jets to Ukraine via a US airbase in Germany, saying the proposal raised “serious concerns” for the entire NATO alliance.

Pentagon spokesman John Kirby said the prospect of the jets flying from a US-NATO base “into airspace that is contested with Russia over Ukraine raises serious concerns for the entire NATO alliance”.

“We will continue to consult with Poland and our other NATO allies about this issue and the difficult logistical challenges it presents, but we do not believe Poland’s proposal is a tenable one,” Kirby said in a statement.

Ukraine’s president has thanked his US counterpart for his “leadership” in banning Russian oil, calling the decision a “powerful signal to the whole world”.

Ukraine has pleaded for more warplanes, and now Poland said it would give all of its MiG-29 fighter jets to the US, agreeing to an arrangement that would allow them to be used by Ukraine’s military.

The Polish Foreign Ministry said in a statement that Poland is ready to deliver the jets to the US Ramstein Air Base in Germany.

“At the same time, Poland requests the United States to provide us with used aircraft with corresponding operational capabilities,” it said.

Russia ready to provide humanitarian corridors from Kyiv, other cities

Russian forces will stop firing from 10 am Moscow time (07:00 GMT) on Wednesday and are ready to provide humanitarian corridors so people can leave Kyiv and four other cities, the TASS news agency reported, citing a senior Russian official.

Nancy Pelosi, the speaker of the US House of Representatives, has said the chamber is set to pass a Russia sanctions bill later on Tuesday. She said the legislation would support Biden’s decision to ban Russian oil imports.

“Our bill has three major provisions: it will ban the import of Russian oil & energy products into the US, it will take steps to review Russia’s access to the WTO and explore how we can diminish Russia in the global economy & it will reauthorize & strengthen the Magnitsky Act,” Pelosi wrote on Twitter.