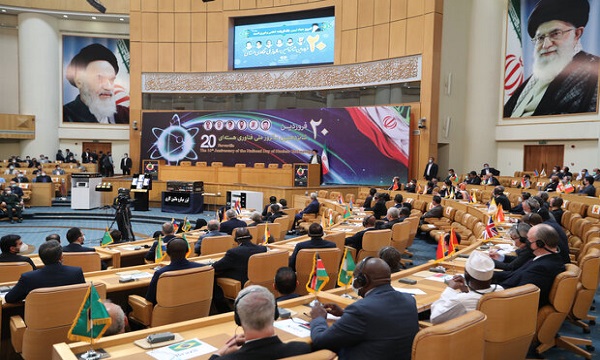 "The Islamic Republic has not left the talks and will not stop them, but our strategy is the same strategy outlined by the Leader of the Revolution; We will never take a step back from the Iranian people's rights," the Iranian President Seyyed Ebrahim Raeisi has said in a post on his Twitter account on Saturday coinciding with the 16th anniversary of National Day of Nuclear Technology.

Speaking on Saturday on the occasion of 16th anniversary of National Day of Nuclear Technology, the Iranian president also said that his government will make its utmost efforts to remove economic problems facing the country.

President Raeisi described the country's nuclear martyrs as flagbearers of an important period in Iranian history and added that Iran’s nuclear scientists and nuclear martyrs were courageous people who actively faced numerous obstacles and never frustrated.

Benefited from the most experienced and talented nuclear scientists, the country has gained salient achievements, he emphasized.

Very tough, oppressive and cruel sanctions were imposed against Iranian people but these sanctions never stopped the country from going towards development and growth, he said, adding that assassination of Iranian nuclear scientists and sabotage acts carried out in Iran’s nuclear sites never stopped growth of the country in advancing its peaceful objectives.

He went on to say that Islamic Republic of Iran has not and will not seek nuclear weapons at any period, rather, it wants nuclear technology for peaceful purposes in a way that government officials have reiterated it time and again.

Elsewhere in his remarks, President Raeisi pointed to the compilation of strategic document of Atomic Energy Organization of Iran (AEOI) for 20-year Vision Plan and stated that compilation of this document deserves appreciation because it proves the existence of ideas and planning to achieve higher horizons.

On the National Day of Nuclear Industry, which belongs to the great nation of Islamic Iran, “We announce that peaceful nuclear activities will continue to move in direction of increasing progress relying upon creativity and innovative measures,” President Raeisi added.