Nujaba ready to support Palestine against Zionists militarily
TEHRAN (Defapress) - In a message to the Palestinian people, the secretary-general of Harakat Hezbollah al-Nujaba in Iraq stressed the readiness of the movement's forces to fight the Zionist regime of Israel as soon as the Palestinians request.
News ID: 84137 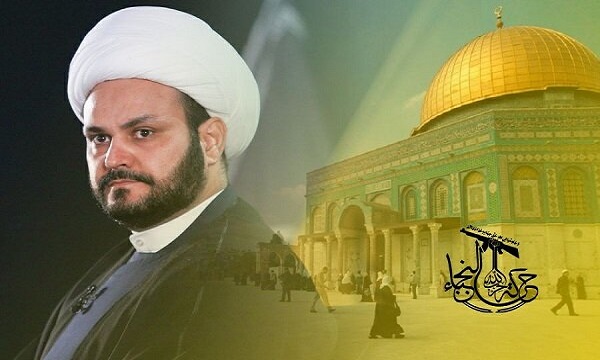 The secretary-general of Harakat Hezbollah al-Nujaba in Iraq Akram al-Kaabi issued a statement on the anniversary of the Sword of al-Quds Operation last year, which was a 11-day battle between the Palestinian resistance groups in the Gaza Strip and the Zionist regime.

Al-Kaabi said that the Nujaba fighters are ready to join the Palestinian struggle as soon as they are ask for.

He said the Nujaba fighters have kept their fingers on the triggers and are ready to enter Palestine to jointly fight the Israeli regime together with the Palestinians.

Shaykh al-Kaabi also stated that the land of Iraq would be a graveyard of anyone who calls for compromise and conspiracy (those who seek normalizing ties with the occupiers) and announced the full preparedness of the Iraqi Islamic Resistance groups to enter the scene of the defense of Palestine and the war against the Israeli occupiers.

He added that the fingers of Palestinian and Nujaba fighters will be kept jointly on the trigger to attack the occupiers in defense of Palestine.