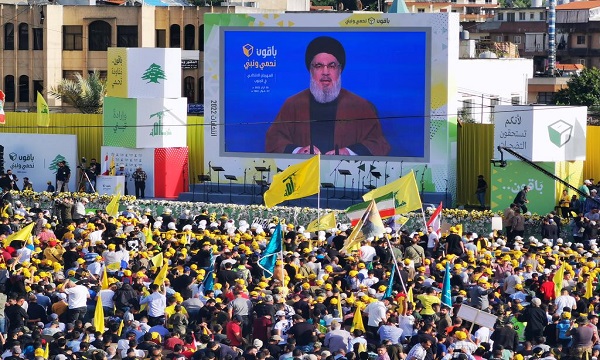 Hassan Nasrallah started a speech at a Hezbollah’s Beirut election festival in Dahiyeh with the participation of a huge crowd of people on Tuesday, Al-Manar reported.afternoon.

The festival in Beirut is dubbed “We Shall Forever Defend and Rebuild.”

"The mass attendance today and yesterday is a message to all those who bet on the turning of the resistance environment against it," Nasrallah said.

He added that " we were able to move from defense to attack within new rules of engagement that we cannot retreat from."

"The voting of expatriates the resistance lists is an act of courage and sincerity," he also said about the upcoming elections in Lebanon.

Nasrallah said that after Quds Day speech, diplomatic channels conveyed a message saying Israelis affirmed their unwillingness to take any action against Lebanon.

The Hezbollah leader also said that the forces will remain on alert until the end of the Israeli maneuvers, the same applies to the Palestinian resistance.

He further stressed the need for a government in Lebanon saying that "the existence of a state is totally important because the alternative to it is chaos."

"We’re not addressing ourselves as an alternative state, no one can play this role in any aspect," Nasrallah said.

The Hezbollah leader also said, "Civil war is a red line, Lebanese people should regard those rallying for it as committing an act of treason."

"We should look forward for a fair and capable state, many objectives can be achieved through it," Nasrallah also said about the necessity of a capable government in Lebanon.

He also called for partnership, non-abolition and exclusion. and stressed that "Everyone must have their eligible representation as per their size."

"Lebanon cannot bear one sect, one movement, one party, or a leading bloc, regardless of its weight or excess of power."

"Nobody should expect that all problems will be tackled if we took part in the state," the Hezbollah chief added.

"Electoral and political alliance does not mean the absence of differences between allied parties and blocs,", he also pointed out, adding that "Not turning to the East to appease the US will not make us advance."

"We have a treasure in the sea while the Lebanese people suffer from unemployment, hiked prices and poverty," Hezbollah chief further noted, adding that "What can the US do other than it did till now, from siege and starvation to rallying ‘Israel’ to attack us?"

"It’s Lebanon’s legitimate right to explore for gas and oil in the disputed area, ‘Israel’ is doing so," he went on to say, adding that "If the enemy attempted to stop us, we’re able to stop it."

Hezbollah chief went on to say that "Lebanon is rich and strong, so why turn into beggars and sit on the doorstep of the International Monetary Fund that imposes humiliating conditions on us?"

"What preserves the rights of depositors is the signature of the new MPs on the bill submitted by the Loyalty to the Resistance Bloc," Nasrallah added.

"The judiciary in Lebanon is stumbling, this must be addressed. A just state means the existence of an impartial and fair judiciary and efficient judges," he also said, adding that "Lebanese are asked to choose between those who call for civil peace and cling to it despite being killed in Tayyouneh and those who offer their services to foreign forces and are ready to make a civil war in Lebanon."

The parliamentary elections in Lebanon will be held on May 15.