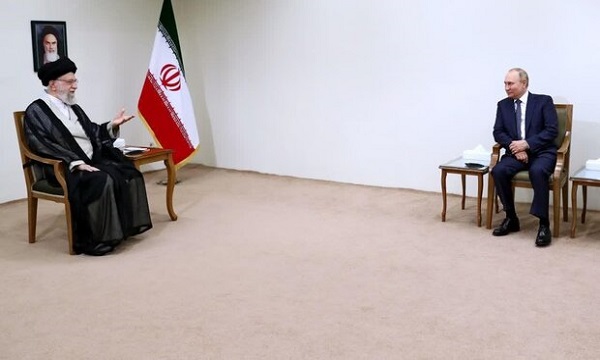 Ayatollah Khamenei said in the meeting with President Putin and his accompanying delegation that the Syrian issue is of extreme importance and the Islamic Republic of Iran’s fundamental stance has always been opposing military intervention there, while the fertile and oil-rich eastern side of the Euphrates River is occupied by the Americans, and they must be forced to leave that region.

Turning to Iran-Russia agreements, the Supreme Leader said that they should be fully and precisely implemented to secure both nations’ interests.

Ayatollah Khamenei highlighted the need to heed the deceiving western policies, arguing that keeping in mind the world events the need for stronger cooperation between Iran and Russia and alertness about them is felt now more than ever before.

He said that Iran-Russia economic cooperation, especially after the western sanctions, is to the benefit of both countries.

Turning to the situation in Ukraine, Ayatollah Khamenei said that war is a harsh way of resolving disputes, and the Islamic Republic is by no means pleased with hardships imposed against ordinary people, but in case of Ukraine, if you had not taken control of the situation, the other side would have with its initiatives caused the outbreak of a war.

The Supreme Leader emphasized that the western powers are opposed to the existence of a strong and independent Russia, arguing that the NATO is a dangerous creature, and if the path before it is left open, it realizes no borders and boundaries.

“If NATO’s path had not been blocked in Ukraine, a while later on pretext of the Crimean Peninsula they would have begun the same war,” he added.

Ayatollah Khamenei reiterated that of course both America and the west have got weaker than before today, and despite their tremendous efforts and spending high amounts, their chance for their winning in our region, including in Syria, Iraq, Lebanon and Palestine, is very low today.

The Supreme Leader also condemned the Zionist regime's interventions in the region and praised the Russian president’s recent anti-Zionist stances.

He also emphasized that the Islamic Republic of Iran will never tolerate policies and programs that will lead to blocking Iran’s borers with Armenia.

Ayatollah Khamenei said that Iran-Russia long term cooperation is seriously and deeply to the benefit of both countries, and addressing President Putin and President Raisi, said that they should pursue the reached agreements and upgrade them to maximum possible level soon.

The leader also said that he agreed with President Putin on the need to complete the Rasht-Astara railway, which will complete the North-South corridor, that will serve both countries’ interests.

Turning back to the need for alertness in confrontation with the deceiving policies of the west, Ayatollah Khamenei said that the Americans are both deceitful and inclined towards forceful pursuing of their objectives.

He said that one of the reasons why the former Soviet Union was disintegrated was being deceived in confrontation with the US policies, adding: Of course Russia has during the period of your good-self preserved its independence.

The Supreme Leader also emphasized that replacing the two countries’ national currencies in their financial transactions, and even using currencies other than the US dollar, will pave the path for gradual getting rid of the US dollar in international business.

In the meeting in the presence of President Ebrahim Raisi, President Putin, too, said that no one favors war and the loss of lives of ordinary people, which is a great tragedy, but the west’s behavior left Russia with no option, but war.

The Russian president listed the roots of Russia’s disputes with Ukraine, especially the intriguing moves of the west and especially America during the recent years, including a coup in Ukraine, and also the expansionist NATO policies, despite their former commitments to refrain from any progress towards Russia.

He said that some European countries said they were opposed to Ukraine’s membership in NATO, but were forced to agree with it under the US pressure, which shows they are neither independent, nor have real national governance.

Putin said that the assassination of Major General Qassem Soleimani was another sample of the notorious American policies.

Elsewhere in his remarks, President Putin referred to the western anti-Russian sanctions, arguing that those sanctions will be to the loss of the west, including the increased oil and foodstuff prices.

He said that America is taking advantage of dollar in its imposed sanctions against the other countries, will in the long run be to their loss and will weaken the world nations’ trust in that currency, and their move towards other currencies to replace them with US dollar.

Putin said that Russia and Iran are designing plans to use their national currencies in their bilateral transactions.

The Russian president said that the Supreme Leader’s stands about the Caucasus region and Syria are quite the same, and Russia is especially opposed to military intervention in the north of Syria, stressing that the control of east side of the Euphrates region must be once again returned to the Syrian legitimate government and their military forces.

Putin said that the two countries’ comprehensive cooperation is progressing rapidly, and especially Iran-Russia cooperation in anti-terrorism campaign, and in military field, and trilateral cooperation with China in war games should still expand.