Iran's crushing response to US 'mistake' beyond imagination

TEHRAN (Defapress) - The reciprocal, crushing and destructive strike of the Iran Armed Forces will be beyond imagination, providing a rapid response to any strategic mistake by world arrogant powers and the US regime, General Bagheri said.
News ID: 82915 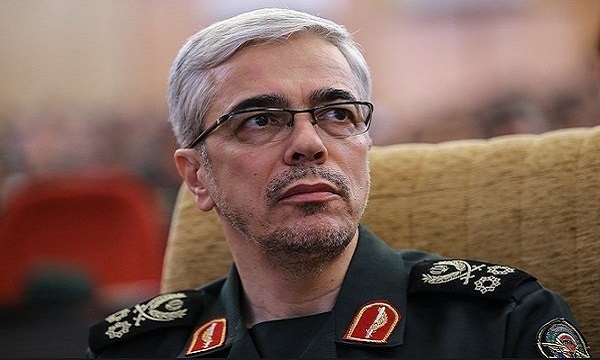 Addressing the commanders-in-chief of the army Major General Abdolrahim Mousavi and the IRGC Major General Hossein Salami in a message, Chief of Staff of Iran's Armed Forces Major General Mohamad Bagheri appreciated these high-ranking military officials for holding the recent Eghtedar 99 and Payambar-e Azam 15 (the Great Prophet 15) drills in Makran coast, the southern areas of the Sea of Oman and the northern parts of the Indian Ocean successfully.

Saying that these large-scale drills demonstrated the authority and comprehensive readiness of the Armed Forces, Bagheri added, “Undoubtedly, the strategic achievements of Iran’s defense industry, parts of which were exposed to the world, will make Zionist Regime and arrogant powers keep wondering about the will, power and strategy of the Islamic Republic for a long time.”

The arrogant powers of the world, especially the terrorist regime of the United States of America and the reactionaries of the region, are aware that reciprocal, and crushing strike of the Iran armed forces to their strategic mistake in greed for the independence, security and territorial integrity of the Iranian nation is beyond imagination, he stressed.

In the end, he stressed increasing the defense and deterrence power of the country under the guidelines of the Leader of Islamic Revolution as well as monitoring the threatening movements of the country with comprehensive intelligence aristocracy.