MKO terrorists attack exhibition on their crimes in Stockholm

TEHRAN (Defapress) - Members of anti-Iran terrorist grouplet, Mujahedin-e-Khalq Organization (MKO or MEK), have attacked the organizers of an exhibition held in Swedish capital of Stockholm on the group’s crimes.
News ID: 84226 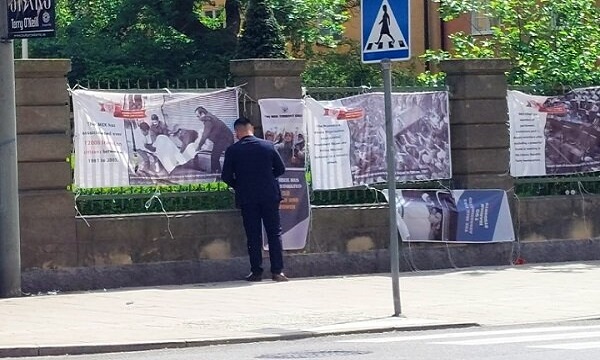 The MKO terrorists slashed the banners with knives and splashed paint on them to hide their brutal crimes, while pelting the organizers with stones and eggs, in what was decried as a blatant affront to democracy and free speech, according to a report by Press TV, whose staff covering the event were also targeted.

According to Habilian, which organizes the exhibition on documents of Mojahedin-e Khalq Organization ( MKO or MeK)'s crimes, the notorious terrorist group had called on its elements in Sweden to get together tasked with slashing the exhibition on Thursday night.

Habilian added that the MKO elements attacked the organizers when they were busy hanging posters, banners, and documents, and tore apart a significant part of them.

While the organizers had gained the necessary permits to hold the event, the Swedish police failed to guarantee the security of organizers by their arriving in the scene late, allowing the terrorists to destroy a major part of the exhibition and assault the Press TV correspondent and his cameraman covering the exhibition there.

According to the Press TV website, the Swedish police finally had to arrest nine of the attackers following the confrontation and released an unspecified number of them afterwards. One of the organizers said some of the terrorists came back and resumed assaults despite police warnings.

In response, the Sweden’s police beefed up security around the event.

The exhibition is held near the court where Iranian citizen Hamid Nouri is on trial based on the evidence provided to the court by the MKO.