No new EU sanction against Iran

TEHRAN (defapress) – Iran’s FM spokesman said the EU has not imposed new sanctions on Iran in the past three years and has only updated the listings of previously sanctioned entities.
News ID: 65243 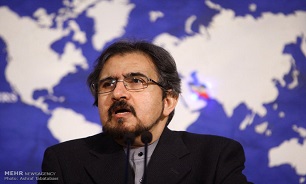 Iranian Foreign Ministry Spokesman Bahram Ghasemi made the remarks in reaction to internal concerns over the European Union’s recent move in regard to the sanction list against Iran; "the EU has not imposed any new sanctions on Iran since the nuclear negotiations that led to the signing of the JCPOA. What has been mistaken in some media as EU new anti-Iranian sanctions is in fact nothing but an update of listings of previously sanctioned entities and organizations that are reviewed periodically," he added.

Ghasemi went on to note, "the EU has made a lot of efforts for implementation of their commitments under the Joint Comprehensive Plan of Action (JCPOA), and while the US non-compliance in some instances and their creation of false hype to impede cooperation of major European banks with Iran are problematic, such complications and shortcomings can undoubtedly be discussed in length in the future.”

"Senior EU officials have in practice stood against US excessive demands and unilateralism and prevented the exertion of hostile pressure by the new American administration against Iran, particularly with regard to the nuclear deal,” Ghasemi stressed.

The recent meeting of the UN Security Council on the monthly report of the Secretary General which was followed by all-out and extensive support from UN European member states is another sign of EU’s commitment to the nuclear deal, he added.