TEHRAN (defapress) – Iranian Oil Minister Bijan Zanganeh said Tehran and Baghdad have reached an initial agreement to build a pipeline that would export crude oil from the northern Iraqi fields of Kirkuk via Iran.
News ID: 65418 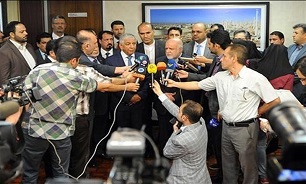 Iran and Iraq are ready to promote their cooperation in the area of energy, Zanganeh said on Sunday after a meeting with his Iraqi counterpart Jabar al-Luaibi in the Iranian capital, Tehran.

The two sides also agreed to construct a joint pipeline to pipe Iraq’s oil through Iran, he added, noting that agreements were also reached about an international company that will carry out a feasibility study of the project.

Iran and Iraq signed a memorandum of understanding in February to study the construction of the pipeline.

The Iranian oil minister also said that the Islamic Republic would begin exporting gas to the Iraqi city of Basra in coming months.

He said there had been some problems in receiving payments for current gas exports to Iraq via banks and that Iran was receiving cash payments.

Al-Luaibi, for his part, described Tehran-Baghdad ties as "strong”, saying that they had discussed transferring Iraqi crude oil to Iranian refineries and returning byproducts to Iraq.

He added that the two ministers also reached an initial agreement to develop the oil fields that the two countries share in the near future.

Back in October last year, the managing director of the National Iranian Gas Company (NIGC) had said that the country was fully ready to start exporting gas to Iraq as soon as the Arab country opens a line of credit (LC) for the project.

Iran laid 100 kilometers of pipelines for the gas project. The two countries signed a deal on the exports of natural gas from the giant South Pars Gas Field to Iraq back in 2013.

Based on the agreement, 25 mcm of gas will be delivered to Sadr, Baghdad and al-Mansouryah power plats through a 270-kilometer pipeline.