TEHRAN (defapress) – Iranian President Hassan Rouhani on Tuesday submitted the list of his proposed ministerial picks to the Parliament for a vote of confidence, four days after his swearing-in ceremony.
News ID: 65510 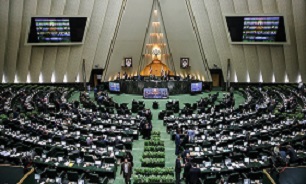 Iranian Vice President for parliamentary affairs, Hossein Ali Amiri, submitted the list of the proposed ministers to the Parliament’s presiding board on Tuesday.

President Rouhani took the oath of office on Saturday. He had two weeks to submit his new cabinet to the parliament, but drew up the shortlist in only four days.

The lawmakers are now going to assess the programs of the proposed ministerial picks for a week, before an open session for the vote of confidence.

Minister of Industry, Mine, and Trade: Mohammad Shariatmadari

Half of President Rouhani’s proposed cabinet has remained unchanged compared to his first term.

Only the position of minister of Sciences, Research, and Technology is still falling vacant.