TEHRAN (defapress) – The head of Atomic Energy Organization of Iran Ali Akbar Salehi rejected any claim regarding inspection of military sites stipulated as a provision in JCPOA.
News ID: 66747 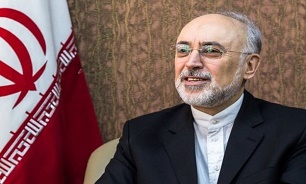 Pointing to the claims over military sites inspection, head of Atomic Energy Organization of Iran (AEOI), Ali Akbar Salehi said "section T in Joint Comprehensive Plan of Action (JCPOA) does not refer to any particular inspection but voluntary commitments always welcomed by Iran.

Speaking to the reporters on Sunday following his joint press conference with head of International Atomic Energy Agency (IAEA) Yukiya Amano, Salehi said "we have always talked on JCPOA's section T while it is totally a clear-cut issue and Iranian Deputy Foreign Minister Seyed Abbas Araghchi has voiced Iran's positions regarding the issue to the Agency."

"The agreements have been made over section T and different aspects were taken into considerations while its formulation and like other provisions of the historic deal, the opposite party resorts to the interpretations according to its taste and wishes," added Iranian Top Diplomat.

Pointing to the visit of IAEA head Amano to France and his meeting with French President Emmanuel Macron, Salehi said Amano has assessed his discussion with Macron as positive, asserting France is willing to maintain JCPOA, and asking IAEA to play its role more seriously and strongly.

Iran senior official reiterated his remarks over any kind of inspection on military sites and the fact that no provision has been mentioned in Agreement on Safeguards, Additional Protocol or JCPOA.

Ali Akbar Salehi also made remarks over Iran’s Nuclear Propulsion Program and appreciated the Iranian Parliament for allocating a budget to it, stating that though this program is a time consuming process, a technical team has been designated to execute it and technical infrastructure is being provided. He predicted that it takes 10 to 15 years for the program to come to result.