The Syrian army and its allies engaged in a fierce battle with Daesh (ISIS or ISIL) militants in an enclave south of Damascus held by the terrorist group, media reports said.
News ID: 69918 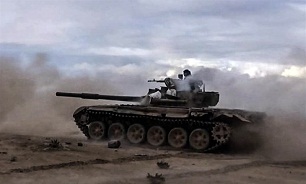 The army had made broad advances, said state television. The monitor, the so-called Syrian Observatory for Human Rights, said it had gained control of several buildings in the densely built-up area, Reuters reported.

Footage on state TV showed tanks rolling across an open area of fields to the edge of the enclave, which includes parts of al-Qadam district, al-Hajar al-Aswad and the Yarmouk Palestinian refugee camp.

It showed uniformed soldiers moving through battered streets with dense clouds of black smoke overhead, while the whizz and crash of artillery fire, the rattle of small arms fire and deep echoing blasts could all be heard.

Syrian forces this month defeated rebels in their biggest stronghold near Damascus in eastern Ghouta, and have since then focused on ending resistance in several smaller pockets near the Syrian capital.