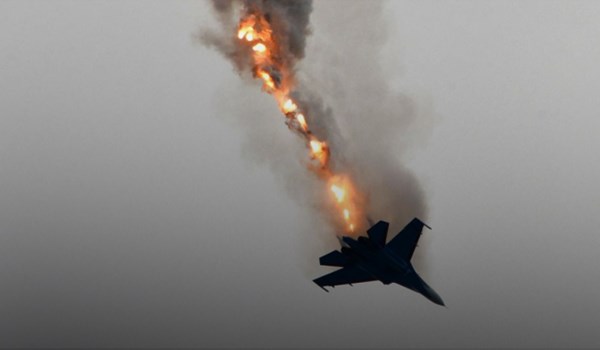 TEHRAN (Defapress)- SANA quoted eye-witnesses as reporting that a fighter jets crashed near the village of al-Mashouh in al-Shadadi region 5 km South of the Hasaka city.

The fighter jet carried no flag and it is not yet clear which country or army it served.

Images of the crashed jet released on social media showed that the front part of jet has completely been separated from main body.

No more information is available on the fight jet or the cause of the crash.

Media sources claimed that the warplane likely belonged to the US-led coalition as the coalition warplanes have been operating in the region near the border with Iraq.

On Monday, a sum of eight civilians was killed and several more were wounded in a fresh round of air attacks by the US-led coalition fighter jets in the Eastern province of Deir Ezzur.

The warplanes bombed several times the township of al-Souseh in Southeastern Deir Ezzur, killing eight civilians, including women and children, and wounding at least a dozen others.

Local sources said that some of the injured were in critical conditions, adding that the township's infrastructures and residential units sustained major damage in the attacks.