President: Turkey’s Partnership with US in Jeopardy

Turkish President Recep Tayyip Erdogan warned his country’s partnership with the United States might be in “jeopardy” as tensions intensify between the two NATO allies.
News ID: 71725 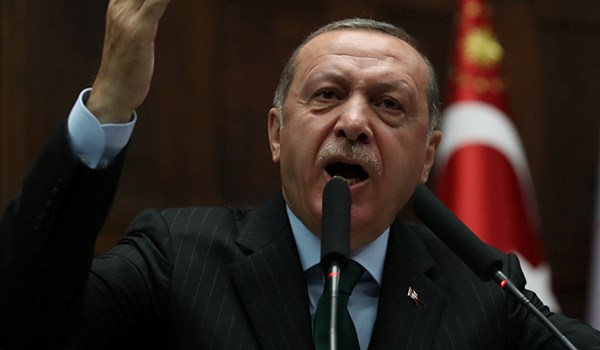 TEHRAN (Defapress)- In an op-end published in The New York Times on Saturday, Erdogan called on Washington to stop unilateralism and start respecting his country and its sovereignty.

"Unless the United States starts respecting Turkey's sovereignty and proves that it understands the dangers that our nation faces, our partnership could be in jeopardy," the Turkish president stated.
Erdogan also warned that Turkey could start looking for new allies if Washington damaged its relations with Ankara.

"Before it is too late, Washington must give up the misguided notion that our relationship can be asymmetrical and come to terms with the fact that Turkey has alternatives," he said, stressed that "failure to reverse this trend of unilateralism and disrespect will require us to start looking for new friends and allies".

Relations between Ankara and Washington have sunk to their lowest point in decades over a number of issues, including the detention of American pastor Andrew Brunson on terror-related charges, and the depreciation of the Turkish lira to hit record lows against the dollar.

US President Donald Trump wrote on Twitter late last month that his country "will impose large sanctions on Turkey for their long time detainment of Pastor Andrew Brunson".

In a tit-for-tat response to the US sanctions, Erdogan responded by announcing that the assets in Turkey of the US secretaries of "justice and interior" would be frozen.

Addressing a rally in the Black Sea town of Unye on Saturday, Erdogan hit back at Washington's "threats" over the detained pastor.

"It is wrong to dare bring Turkey to its knees through threats over a pastor," Erdogan stated, adding that "I am calling on those in America again. Shame on you, shame on you. You are exchanging your strategic partner in NATO for a priest".

He once again called on Turks to sell dollars and euros to prop up the plunging national currency.
The embattled lira tumbled 16 percent against the dollar on Friday, with Trump saying he had doubled steel and aluminum tariffs on Turkey in comments that contributed to the currency's further slide.