TEHRAN (defapress)- Iran's UN Envoy Gholamali Khoshroo recommended that the US should abandon unilateralism as the country is now more isolated than ever before.
News ID: 72996 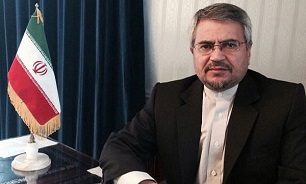 He said that the US' unilateral policies on legal, international and environmental issues and the country's withdrawal from the international agreements, including the Iranian nuclear deal have increased the US isolation in the world.

"The US' unilateralism during Haley's tenure led to the US' isolation in the UN," opined Khoshroo adding that despite Haley efforts in the UN, the Palestinian issue is still a top priority

The US President Trump accepted Haley’s resignation earlier on Tuesday and said that she will be leaving her job by the end of the year. She reportedly discussed the move with the president last week during a visit to the White House.

Haley had disagreed with the president on key issues like his much-maligned travel ban, and on his distaste for NATO. However, Haley insisted last month that she dealt with disagreements in a professional manner, picking “up the phone to call him or meet with him in person".

She has overseen Trump's shift in dealing with the UN, including the US exit from the UN Human Rights Council, which Haley called the organization's "greatest failure".