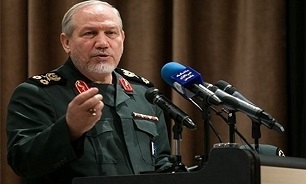 He made the Saturday remarks at Tehran-based Holy Defense Museum in a ceremony for unveiling a book related to Iran-Iraq war.

According to documents found in the US embassy in Tehran, from the 1953 Coup to the overthrow of Mohammad Reza Pahlavi in 1979 all the affairs of Iran was in control of the United States, he highlighted.

In the past 40 years, the US has put all-out effort to fight Iran but they have conceded a defeat and are forced to retreat from the western Asian region, Safavi added.

He went on to say that the power of the United States is waning, and with the formation of the Resistance Axis and the guidance of Islamic Revolution Leader and late Imam Khomeini (RA), nations take control of their own fate.