TEHRAN (defapress) - The Mexican Interior Ministry said earlier in the day that up to 500 migrants who had attempted to storm the US border, causing the closure of the checkpoint between the countries, would be deported by the Mexican authorities.
News ID: 73951 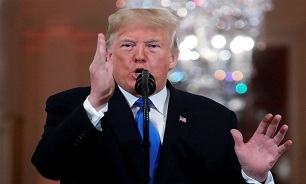 US President Donald Trump commented on the recent crisis on the US-Mexico border on Monday, urging the US Congress to fund the border wall's construction in order to stop illegal migrants from coming into the country.

Trump earlier threatened to close the whole border between the US and Mexico due to a massive migrant caravan from Central America that approached the country, also stating that there could be another government shutdown in December if a bipartisan agreement on the border security issue was not found, Sputnik reported.

Tensions in the Mexican border town of Tijuana have been running high since the caravan of thousands of migrants arrived there from Central America earlier in November. Addressing the issue, the Pentagon deployed 5,900 troops in order to prevent the migrants from crossing the border into the US.