TEHRAN (defapress) – A senior member of Assembly of Experts, Ayatollah Seyed Ahmad Khatami, said it is vital for Iran to preserve its missile power in the face of aggression and enmity from the US and allies.
News ID: 75515 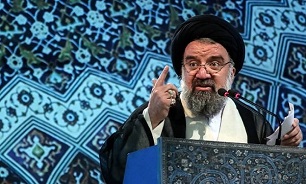 Ayatollah Seyed Ahmad Khatami, a senior member of Assembly of Experts, said “missile might is vital for Iran, because we are living in a world where the Arrogance and its allies are like wolves and define power only in terms of plundering and aggression.”

He noted that with the US’ withdrawal from the Iran nuclear deal, the agreement is as good as dead, and “what sustains Iran in this situation is our missile might.”

Ayatollah Khatami then highlighted that Iran has never had any intention to build nuclear bombs; “the formula is there, but Iran does not seek to use weapons of mass destruction.”

He added that the country, however, considers possession of nuclear energy for peaceful purposes as vital.