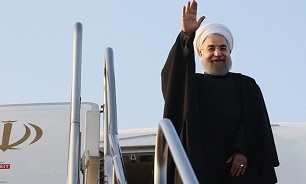 Iranian President will meet with different groups of people and officials during the two-day visit as well as inaugurating various projects in the province.

He is going to address the people some minutes later in a stadium in Bandar Lengeh.

Rouhani is slated to inaugurate two projects in the third phase of the Persian Gulf Star Refinery (PGSR) in the afternoon.