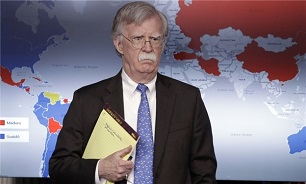 Guaido has announced his return to Venezuela after the Latin American tour he kicked off in defiance of a travel ban, calling for new rallies to be held across the country on Monday, Sputnik reported.

"Venezuelan Interim President Juan Guaido has announced his planned return to Venezuela. Any threats or acts against his safe return will be met with a strong and significant response from the United States and the international community," Bolton wrote on Twitter on Monday.

Bolton stated earlier that Washington plans to create a coalition to change the government in Venezuela amid the ongoing political crisis in the Latin American country.

"We are trying to rally support for the peaceful transition of power from [Venezuelan President Nicolas] Maduro to [self-proclaimed interim president of Venezuela] Juan Guaido, whom we recognize as president […] I'd like to see as broad a coalition as we can put together to replace Maduro, to replace the whole corrupt regime. That's what we are trying to do", Bolton said in an interview for the CNN broadcaster.

Earlier this week, Venezuelan President Nicolas Maduro, who has repeatedly slammed Guaido as a "US puppet" and accused Washington of trying to stage a coup in Venezuela, said that the opposition leader must be tried if he returns.

US-backed Guaido, who proclaimed himself Venezuelan interim president in January, crossed into Colombia days ago in defiance of a Venezuelan Supreme Court order barring him from leaving the country due to an ongoing investigation. After unsuccessful attempts to deliver US-sponsored humanitarian aid to Venezuela from the neighboring country, Guaido announced that he plans to return home. According to the deputy judge of the Venezuelan Supreme Tribunal of Justice, Juan Carlos Valdez, Guaido may face up to 30 years in jail for breaching foreign travel ban.

US Special Envoy for Venezuela Elliott Abrams has threatened Caracas with a major international reaction in case of Guaido’s arrest.

The United States has recognized Guaido and around 50 other countries followed suit. Russia, China, Cuba, Bolivia, Iran, Turkey and a number of other states have, in the meantime, voiced their support for the legitimate government of constitutionally elected Maduro. Mexico and Uruguay have refused to recognize Guaido, declaring themselves neutral and promoting crisis settlement via dialogue.