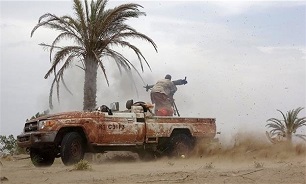 The media bureau of the Houthi Ansarullah movement, citing an unnamed Yemeni military source, reported on Monday that Yemeni troops and their allies detonated a number of explosive devices in the Jabal al-Qais mountainous area of Jizan, killing 24 Saudi mercenaries in the process, presstv reported.

Elsewhere in Najran region, South of the Saudi capital Riyadh, dozens of Saudi-paid militiamen were killed by Yemeni forces’ attack on their positions.

Yemeni soldiers and their soldiers infiltrated militia-controlled areas on the outskirts of al-Sadis military base, setting off several bombs that killed dozens of Saudi mercenaries as a result.

Separately, a number of Saudi mercenaries were killed or injured when Yemeni forces launched a barrage of artillery rounds at their gatherings in Asir region in Saudi Arabia.

Saudi Arabia and a number of its regional allies launched a devastating campaign against Yemen in March 2015, with the goal of bringing the government of former Yemeni president Abd Rabbuh Mansur Hadi back to power and crushing Ansarullah.