Resistance Movement Will Not Be Weakened

TEHRAN (defapress) – The secretary general of Hezbollah said the Lebanese resistance movement might face difficulties because of its anti-corruption campaign, however, it will not be weakened but will be further strengthened in order to achieve more victories.
News ID: 76063 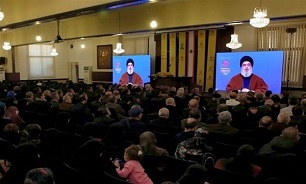 Addressing his supporters via a televised speech broadcast live from the Lebanese capital, Beirut, on Friday evening, Seyed Hassan Nasrallah said the resistance movement would press on with it battle against corruption in the Arab country.

He added, “Those who have supported us will continue to support us, be they states or peoples. We might face (financial) difficulties, but this resistance will not be weakened. Rather, it will be further strengthened in order to achieve more victories.”

Nasrallah said he expected US sanctions “to get tighter on us and our supporters.”

He added, “We may see new names, and new people, and new organizations added to the sanctions lists.”

Nasrallah vowed that his party would press on with the battle against corruption to the end, saying that the anti-graft fight was equal to Hezbollah’s guerrilla war that ended Israel’s 18-year occupation of south Lebanon in 2000. He warned that corruption, largely blamed for the waste of public funds, threatened the country’s survival.

“We are bound by religious duty to fight corruption. We consider ourselves in a battle that is no less sacred than the resistance’s battle against (Israeli) occupation,” Nasrallah said, according to the Daily Star.

“We want to prevent the economic and financial collapse, halt the theft of public funds and confront corruption in state administrations so that the state and the people can survive.”

“We in this battle ... want to achieve the goal and not to make political and media gains. We want to stop the waste (of public funds) and corrupt people and for the money looted from the state to return to the state,” he added.

Nasrallah said his party would not be deterred by “insults” against it over its anti-corruption drive. He called on those who accuse it of corruption to go to the judiciary.

“You can expect anything from Hezbollah in this battle. It’s a battle of the nation’s survival and to save the state from the hands of corrupt people and thieves, no matter what the sacrifices are.”

“Don’t count on our fatigue in this battle. We never felt tired in the 1982 resistance (against Israeli occupation),” he said.

Nasrallah stressed that Hezbollah was “not competing with anyone in this battle (against corruption) and whoever works on this ... we are with them.”

Since last month, Hezbollah MP Hasan Fadlallah has been spearheading a campaign by the resistance movement against corruption, and last week he submitted documents to the financial prosecutor to back up allegations of missing public funds.

Earlier in the month, Fadlallah had said that there were “manipulated and missing financial documents that could land a lot of people in jail ... including ex-prime ministers, who may be held accountable.”

Fadlallah didn't name or accuse anyone directly in his filing, but former prime minister Fouad Siniora made comments suggesting that Fadlallah was targeting him.

Siniora had long been accused of illegally spending some $11 billion in extrabudgetary spending during his tenure, and late last week he held a news conference to deny that the $11 billion had been spent illegally.