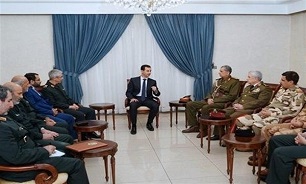 In a Monday meeting with top military commanders of Syria, Iran and Iraq in Damascus, Assad said, “The relation, which gathers Syria with Iran and Iraq, is strong.”

The bond was reinforced during Syria’s battle against foreign-backed terrorism and militancy, he added.

The Syria president also described the terrorists and mercenaries as a mere façade for the countries that support them.

Assad and the three commanders also discussed the latest developments in Syria and ways to enhance coordination for a more successful anti-terror battle, Press TV reported.

In the meeting with Assad, General Baqeri said the anti-terror fight and defending Syria boosts Iraq and Iran’s security as terrorism threatens the three countries alike and also targets the region as a whole.

The states and peoples of the region have to coordinate their efforts to combat this threat, the top Iranian commander added.

Speaking to reporters upon his arrival in Damascus, the Iranian commander had announced that the foreign forces stationed in Syria without coordination with the Damascus government should leave the Arab country.

On Monday, General Baqeri said at a joint press conference with his Syrian counterpart that the fight against terrorists will continue until their full elimination.