TEHRAN (defapress)- Iranian Foreign Minister Mohammad Javad Zarif, in a tweet on the threshold of the 5th year of Saudi Arabia's bloody war on Yemen, urged Riyadh to put an end to the nightmare started by war.
News ID: 76447 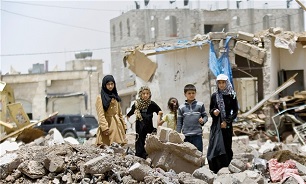 "On the eve of the war's shameful FIFTH YEAR, a reminder that it's not too late to stop the nightmare that this war has become," Zarif said in a post on his official Twitter account on Tuesday.

The top Iranian diplomat also pointed to Iran's four-point peace plan that he proposed in the weeks that the campaign had begun in 2015, and said Saudi Arabia and its allies rejected the proposal "claiming that victory was at hand within THREE WEEKS."

Saudi Arabia & its allies rejected Iran's peace plan for Yemen in April 2015—claiming that victory was at hand within THREE WEEKS.

On the eve of the war's shameful FIFTH YEAR, a reminder that it's not too late to stop the nightmare that this war has become. #StopTheWarOnYemen

In April 2015, Iran's Foreign Minister Zarif submitted a four-point peace plan for Yemen to the United Nations in an attempt to end the bloodshed in the Arab country.

"It is imperative for the international community to get more effectively involved in ending the senseless aerial attacks and establishing a ceasefire," Zarif said in the letter, adding that Tehran is ready to cooperate with the UN “to facilitate and encourage an immediate end to these senseless bombardments and initiation of a genuine dialogue to find a political solution to this tragic crisis.”

In a Monday statement on the occasion of the 4th anniversary of the beginning of Saudi Arabia’s war of aggression against Yemen, Iran's Foreign Ministry, voiced its strong support for the UN-backed peace process, and urged ending economic blockade against the poor country.

The Foreign Ministry said in the statement that Tehran supports an overarching ceasefire in Yemen while calling for an end to the “tyrannical” economic and human blockade imposed on the people of Yemen.

“In line with its policy to seek a political solution to the crisis in Yemen and within the framework of a four-point plan, which was proposed by (Iran's) foreign minister at the beginning of the campaign against Yemen, the Islamic Republic of Iran declares its support for all forms of overarching and comprehensive ceasefire and removal of the tyrannical economic and human blockade of the people of Yemen,” the statement read.

Elsewhere in its statement, Iran's Foreign Ministry urged all political groups in Yemen to reach a political agreement, which would meet the demands of the country’s people while asking the international community to support any effort made to alleviate the suffering of Yemeni people, especially women and children.

The Iranian ministry once again threw its weight behind the Stockholm agreement and urged countries engaged in the Yemeni crisis to make necessary preparations for the full implementation of the deal.

It also expressed hope that the complete implementation of the agreement would be the first step toward a final settlement of the crisis in Yemen.

Saudi Arabia and its allies, including the United Arab Emirates, Morocco, and Sudan, launched a brutal war against Yemen in March 2015 in an attempt to reinstall Yemen’s former president Abd Rabbuh Mansur Hadi.