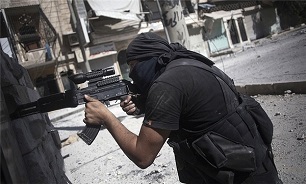 Dissident sources were quoted by the Arabic-language al-Watan newspaper as saying on Thursday that Tahrir al-Sham has sent a large number of military equipment to regions occupied by Ahrar al-Sham in the towns of Ariha, Ma'arat al-No'aman and Qalat al-Maziq with the aim of taking full control of Idlib province.

They added that Tahrir al-Sham is now in control of 90% of Idlib province and adjacent areas in Hama and Lattakia, saying that it will likely take full control of the demilitarized zone designated by the Sochi Agreement between Russia and Turkey.

Meantime, the Syrian army targeted the militants' movements from the town of al-Janabareh in Northern Hama and al-Tamane'ah in Southern Idlib with artillery and missile attacks after their continued offensives from the demilitarized zone, fully annihilating two terrorist groups.

Other reports also said that the terrorist groups in Northern Aleppo launched missile strikes on the residential areas in the town of al-Zahra in Western Aleppo.

In late February, Arab media reports said that the Turkish intelligence officials and commanders of Tahrir al-Sham al-Hay'at had been meeting on protecting and keeping the terrorist group in Idlib province.

Al-Watan newspaper quoted sources close to the militants as saying that Ankara had set conditions for supporting Tahrir al-Sham and its continued control over Idlib, saying that they should follow Ikhwan al-Muslimoun (Muslim Brotherhood) approach.

They added that the two sides have reached an agreement that includes a shift of approach by Tahrir al-Sham. "In return Turkey has promised the terrorist group that it will prolong the demilitarized zone agreement as long as possible, will not participate in any joint military operations against Tahrir al-Sham and will try to prevent such operations."

The paper also referred to the Syrian army's airstrikes against the terrorists in Northern and Northwestern Hama and Southeastern Idlib in response to their attacks, raising the possibility that military operations in Idlib would soon start.

The Turkish army has in recent days sent over 20 vehicles, carrying soldiers, military equipment and prefabricated houses to Northern Hama and Southern Idlib to strengthen its occupied points in Northern Syria in regions near the areas occupied by Tahrir al-Sham terrorists.