Western States, US Footprints Found in Terrorists' Strongholds in Syria

TEHRAN (defapress)- The Syrian army discovered a cache of arms and military equipment, including US and West-made weapons, during cleansing operations against remnants of ISIL terrorists in Deir Ezzur province and Eastern Damascus.
News ID: 76754 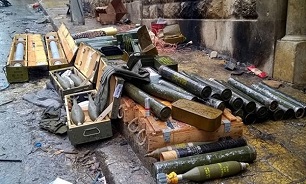 The engineering units of the Syrian army on Thursday found weapons and equipment, including machine-guns, RPGs, missiles, different types of guns, West-made grenades and US-made anti-tank missiles in purging operations in the town of Arabayn and al-Zamir region in the Eastern Ghouta of Damascus.

Meantime, a field source in Eastern Syria reported that the Syrian army purged the ISIL terrorists during operations from Panaroma square at the Southern entrance of Deir Ezzur city to Talat Um Aboud region near the international Deir Ezzur-Palmyra road.

He added that the Syrian army forces defused and detonated a large number of anti-personnel and anti-tank mines, including the US-made ones, left behind by the ISIL terrorists.

The US, Israel and other western states have helped the terrorist groups in Syria logistically and financially.

This is not the first time that the West's footprints are found in the terrorists' strongholds in Syria.

In a relevant development earlier this month, The Syrian army discovered a cache of weapons and military equipment, including West-made arms, during cleansing operations in regions freed from terrorists' hands in Northern Dara'a.

The engineering units of the Syrian army last Monday found a large number of different types of weapons, machine-guns, RPGs, guns and ammunition left behind by the terrorists who had earlier occupied the town of Ankhal in Northern Dara'a.

Among the seized weapons, several types of arms and ammunition manufactured by the western companies, communication systems and night-vision equipment were found as well.