TEHRAN (defapress) The fighters of al-Nujaba, on the second day of its serving the Iranian flood-stricken people in Khuzestan, distributed foodstuffs in Karun and Kut Abdollah.
News ID: 76846 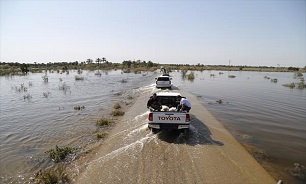 samaneh moslemi: According to the report of al-Nujaba’s Centre for Relations and Media Affairs in Iran, the combatants of the Iraqi al-Nujaba Islamic Resistance, helping the victims of Iran floods, on Monday, in order to provide the regions, having received less aids, with services, set off to the cities located around Ahwaz.

To this end, al-Nujaba’s convoy, visiting the Governorate of Karun, acquired the required information on the conditions of the flood-hit and damaged areas, went to Bariche village, located around Kut Abdollah and distributed the relief packages and the needed foodstuffs among the people of this region.

Besides, some other groups of al-Nujaba’s voluntary forces, carried the humanitarian aids of the Movement using boats to Amashiyeh-ye Yek village, located in Anaqcheh rural district and became informed on the damages and disorders caused by the recent floods.

Due to the bad conditions of the region and poor access of the Jihadi groups to it, Amashiyeh-ye Yek is experiencing many hardships, and al-Nujaba has accordingly put helping this region on its schedule. As a result, the residents of this region has warmly welcomed the Iraqi combatants and showed their appreciation to the officials of al-Nujaba.

And during the meeting between the chairman of Executive Board, and the deputy secretary general of al-Nujaba, Haj Nasr ash-Shammari, and the governor of the district, Manoochehr Warnaseri, two parties talked about the conditions of the flood-stricken region and assessed the damages of floods to villages located around Bavi county.

It worth mentioning that, due to the attacks of the Western Media and their puppets for ruining the face of the Resistance Front, the governors of Bavi and Karun on the behalf of the nation and the government of the Islamic Republic of Iran applauded the attempts made by al-Nujaba Movement for maintaining unity of the nations.