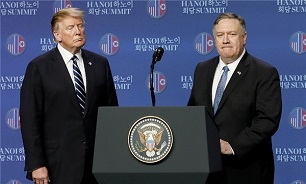 North Korea signaled that it would like to see Pompeo replaced by someone more careful and "mature” in talks with Pyongyang, stating that the top diplomat should step aside from the nuclear talks with in favor of someone “who can communicate more cautiously and more maturely", according to state-run KCNA outlet.

The media also quoted Kwon Jong Gun, a top foreign ministry official, who cautioned that “if Pompeo engages in the talks again, the table will be lousy once again and the talks will become entangled”.

In mid-March, Pyongyang threatened to suspend negotiations with the administration of President Donald Trump, stressing that leader Kim Jong-un would soon decide whether to resume nuclear and missile tests.

Vice Foreign Minister Choe Son Hui blamed top American officials for the breakdown of summit in Hanoi between Trump and Kim, stressed that Pompeo and National Security Adviser John Bolton had created an “atmosphere of hostility and mistrust” that thwarted the top leaders’ negotiations in Vietnam.

In the wake of the failed summit, Kim promised to boost defense while giving the White House until the end of the year to change its “posture” in dealing with Pyongyang.

Kim stated on Saturday that North Korea will continue increasing its military capabilities in the face of persisting risks to its sovereignty.

The North Korean leader also said he was ready to wait for the US president to change his attitude to denuclearization talks until the end of the year.

"Until the end of the year, I will be patient, I will wait for the US president, although it will be difficult to come up with an opportunity as good as it was last time [during the February 27-28 summit in Vietnam’s Hanoi]," he stated, adding that holding a third summit would require "constructive decisions for the improvement of relations".

On Thursday, North Korea’s official Korean Central News Agency (KCNA) reported that Kim has overseen the test-firing of a new type of “tactical guided weapon”, the first public test since the collapse of a second round of top-level negotiations between Washington and Pyongyang.

The second summit between Trump and Kim in Vietnam in February wrapped up early, after the two leaders failed to reach an accord on the denuclearization of the Korean Peninsula. While Washington insisted that North Korea should get rid of their missile and nuclear weapon programs, Kim allegedly made it clear that Trump must offer sanctions relief before the denuclearization process can proceed.

Trump has stated that his talks with Kim broke down because the North Korean leader wanted the removal of sanctions "in their entirety", a claim rejected by Pyongyang, which insists it merely wanted a partial lifting of the biting economic penalties.