TEHRAN (defapress) – Head of Iran's General Inspection Organization (GIO), Naser Seraj said on Thu. that regional cooperation is the only way to confront US unilateralism in the international level.
News ID: 77048 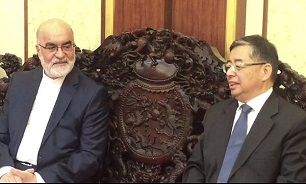 Seraj, who is in China for participating in International Conference on “One Belt, One Road Initiative”, made the remarks in his meeting with the Deputy Head of Chinese Communist Party Li Shulei and added, “boosting regional cooperation and setting up institutions for developing and expanding foreign trade in Asia is one of solutions to confront US excessive demands and financial monopolism in the global level.”

He hailed the outstanding positions of Chinese government in the face of confronting US unilateralism and opposing to the reimposition of sanctions against Iranian government and nation.

“One Belt, One Road” Initiative plays an important role in growth and development of member states and hiking monetary value and gross domestic product (GDP) of member countries as well, Seraj stressed.

He described the expansion of relations in Asian, European and African continents within the framework of “One Belt, One Road” Initiative as a “civilization and cultural theme” and reiterated, “Silk Road is a hub for introducing world’s great civilizations to one another.”

He further noted, “Iran’s General Inspection Organization is ready to cooperate and collaborate with other member states in relevant issues such as judicial cooperation and countering corruption, etc.”