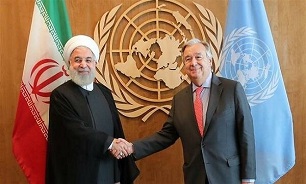 “The secretary general has consistently reiterated that the JCPOA represents a major achievement in nuclear nonproliferation and diplomacy and has contributed to regional and international peace and security,” said Guterres’ spokesman, Farhan Haq, in a news conference on Wednesday.

The UN chief strongly hopes that the nuclear deal can be preserved, Haq said.

Iran says at any given time that its demands are met, it will resume complying with the suspended commitments, which have been made impossible to continue due to the US measures and sanctions.

The decision to reduce commitments to the JCPOA comes as Washington is ramping up pressure against Iran, by re-imposing new sanctions, including restrictions on Iran's low-level uranium enrichment, and ending the sanctions waivers for Iran’s major oil clients in an attempt to drive the country’s oil exports to zero.

Iran has stressed that it has no intention to leave the JCPOA, and its decision on reducing commitments is still within the framework of the agreement.