TEHRAN (defapress) – Iranian President Hassan Rouhani warned the US that Iran will once again show a decisive response to any violation of its territorial integrity.
News ID: 77875 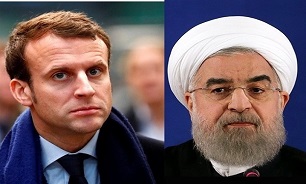 In a telephone conversation with his French counterpart Emmanuel Macron on Tuesday, Rouhani underlined that the US is going to get another decisive response from the Iranian armed forces if it ever repeats the mistake of violating the Islamic Republic’s borders.

“If the Americans decide to invade Iranian waters and airspace, the armed forces of the Islamic Republic will confront them and give them a crushing response,” he told Macron, a week after Iranian Air Defense units shot down an intruding US spy drone in Iran’s airspace.

Rouhani went on to say that Iran is not interested in heightening tensions in the region and has never been after a war with any country, including the US.

“We have always remained committed to regional peace and stability and have done our best to contribute to the regional security,” he said.

He referred to Iran’s full compliance with the 2015 nuclear deal and the need for the Europeans to fulfill their promises to guarantee Iran’s economic benefits under the accord, including removing obstacles in the banking ties and the sale of oil.

Unfortunately, none of the Europeans’ promises have been fulfilled, Rouhani deplored.

“If Iran can’t benefit from the economic aspects of the JCPOA, it would scale down its commitments under the deal based on articles 26 and 36 of the nuclear accord,” he added, IFP News reported.

The Iranian president reiterated that Iran will never sit for another round of talks over what was achieved two years ago, saying that by violating international law through exerting pressure on the Iranian nation, the Americans showed that they are not after resolving issues.

Iran has always contributed to lasting developments in the region along with France and will do the same in the future, he stressed.

“If the other sides of the Iranian nuclear deal had lived up to their pledges under the nuclear accord, today, we could witness some positive and promising developments in the region.”

For his part, Macron expressed regret over the US withdrawal from the nuclear deal and imposition and intensification of sanctions against Iran, saying, “France has always attempted to save the JCPOA and persuade the other parties, especially the United States, to live up to it.”

He also referred to the status quo of the region and the downing of the American drone by Iran’s air defense systems, saying, “We need to promote cooperation and interaction with the aim of developing stability and security in the region.”

Macron stressed that all counties should attempt to prevent regional tensions from escalating, saying, “Many of the decisions made by the US government are of domestic use.”