No Reason for Iran to Stick to JCPOA

TEHRAN (defapress) – Iran’s Deputy Foreign Minister Abbas Araqchi said Europe’s failure to ensure Tehran’s interests under the 2015 nuclear deal has left the Islamic Republic with no choice but to cease a one-way commitment to the agreement.
News ID: 77880 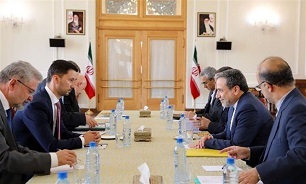 State Secretary of the Ministry of Foreign and European Affairs of the Slovak Republic Lukas Parizek, who is in Iran for political consultations between the two countries, met with Iranian Deputy Foreign Minister for Political Affairs Seyed Abbas Araqchi in Tehran on Tuesday.

During the talks, the two sides conferred on bilateral relations, as well as regional and international developments.

Araqchi expressed satisfaction with the continuation of political contacts and consultations between the two countries and highlighted the great capacities for economic and commercial relations between two nations.

"By taking advantage of the current situation, the two countries have fortunately taken major steps to strengthen and boost the mercantile and trade ties," Araqchi said, according to the Foreign Ministry’s official website.

"It is hoped that holding the Iran-Slovakia Joint Commission’s meeting in the future would upgrade and solidify this trend," he added.

He also touched on Iran’s strategic patience during the past year in the face of the US illegal and unilateral move to withdraw from the JCPOA, and highlighted the European countries’ procrastination and failure to honor their commitments under the deal.

"Sadly, the balance between the Islamic Republic of Iran’s obligations and rights under the JCPOA has been now upset, and considering the European side’s unfulfilled pledges, there remains no reason for the implementation of Iran’s one-way commitments. However, Iran has kept the window of diplomacy open by gradually reducing its commitments."

For his part, the state secretary of the Foreign Ministry of Slovakia emphasized the Bratislava government’s serious willingness for continued political consultations and strengthening of the economic, commercial and cultural cooperation with Iran.

"We are determined to strengthen reciprocal ties, particularly the bilateral economic and trade cooperation, and are ready to hold the joint commission’s meeting in the near future to that end,” he said.

The Slovak diplomat also pointed to his country’s support for the JCPOA, expressing hope that INSTEX, a payment channel that the three EU signatories to the JCPOA have set up to maintain trade with Iran, would become operational and Europe would maintain and strengthen its economic and trade ties with the Islamic Republic.

On May 8, 2018, US President Donald Trump pulled his country out of the JCPOA, a 159-page nuclear agreement between Iran and the Group 5+1 (Russia, China, the US, Britain, France and Germany) came into force in January 2016.

However, the EU’s failure to ensure Iran’s economic interests forced Tehran to stop honoring certain commitments under JCPOA on May 8, 2019.