TEHRAN (defapress)- Secretary of Iran's Supreme National Security Council (SNSC) Ali Shamkhani on Wednesday told the French president's envoy that his nation is resolved to continue scaling down its nuclear deal undertakings if faced with the Europeans' inaction vis-a-vis it obligations.
News ID: 78036 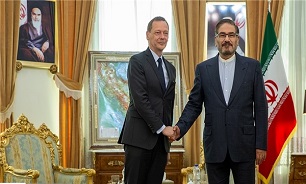 "The present course of action will continue within the framework of paragraphs 26 and 36 of the nuclear deal until a full materialization of Iran's rights," Shamkhani said in a meeting with French president's diplomatic advisor Emmanuel Bonne in Tehran on Wednesday.

He described the US policy of maximum pressure on Iran as a failed strategy, and said, "Iran has practically proved that it enjoys the capability and capacity to manage and confront different tensions and challenges in economic, political and defense dimensions and the language of force cannot be used against a country with such features and qualities."

Shamkhani reminded that Europe had a yearlong chance to comply with its nuclear deal undertakings, but took no action, and reiterated that the era of Iran's unilateral compliance with the nuclear deal has come to an end now.

"Today, the US has taken hostage Europe's independence and the EU countries should stand against the US unilateralism to defend their identity and independence," he stated.

Bonne, for his part, denied media speculations that he is in Tehran to play a mediatory role between Tehran and Washington, saying, "I have no message from the US to Iran."

He added that French President Emanuel Macron is looking for joint initiatives to bring the US economic war against Iran to a halt, noting that Paris is interested in continued talks and cooperation with Tehran to handle the current crises in Syria, Yemen, Iraq and Lebanon given Iran's undeniable and influential role in the region.

"Despite the US will and measures, Iran's power, influence and stance have considerably grown in the regional and international equations in the past 20 years," Bonne said.

In return, Iran's Supreme National Security Council (SNSC) announced in a statement on May 8 that the country had modified two of its undertakings under the Joint Comprehensive Plan of Action in return for the US abrogation of the deal and other signatories inability to make up for the losses under the agreement, warning that modifications would continue if the world powers failed to take action in line with their promises.

In addition to their defiance of the JCPOA, the Europeans showed more animosity towards Iran last Thursday and seized an Iranian oil tanker by Britain at the US request.

Spokesman of the Atomic Energy Organization of Iran (AEOI) Behrouz Kamalvandi told FNA on Monday that enhancing nuclear enrichment levels to 20% could well be the next move by Iran in case Europe failed to provide Tehran with the promised merits under the nuclear deal, adding that enrichment levels stood at 4.5% one day after phase two of scaling down JCPOA undertakings started.

"The level of Iran's (uranium) enrichment has exceeded 3.67% and at present the purity level of the produced materials is nearly 4.5%," Kamalvandi said.

He added that the current level of enrichment fully met Iran's needs to fuel for the nuclear power plants, explaining that they consume enriched uranium with different purity levels up to 5% or less.

He also warned that Iran’s next step within the present course of action that had seen a reduction of undertakings under the 2015 nuclear deal, officially known as the Joint Comprehensive Plan of Action (JCPOA), would be stronger, saying that 20% uranium enrichment was an option.

"Twenty percent is not needed now, but if we want we will produce it. Now that we have gone past the 3.67% enrichment, there won't be any problem with this action," Kamalvandi said.

Options for enriching at higher levels had been discussed with the SNSC, the spokesman said.

"There is the 20% option and there are options even higher than that but each in its own place. Today if our country's needs are one thing, we won't pursue something else just to scare the other side a little more. But they know it's an upward trend," he said.

Kamalvandi said increasing the number of centrifuges was an option for Iran's third step along the lines of the policy of modifying commitments to the nuclear deal, noting that restarting IR-2 and IR-2 M centrifuges was also another option.

The remaining European signatories to the nuclear deal, he said, should act quickly to fulfill their promises because Iran will continue reducing its commitments to the deal until achieving result.

Kamalvandi had announced on Sunday the start of enriching uranium to a higher purity level than 3.67% as Iran's second step to modify its nuclear deal undertakings.

He said that Iran could continue enrichment to the levels that it needs for fueling its power plants, or its research reactor like the one in Tehran University or to fuel nuclear propulsion systems, explaining that each of these needs required enriching uranium to specific levels.

He said Iran at present wanted to produce the needed fuel for its nuclear power plants, but if a new order was issued by the high-ranking officials, the AEOI could further increase the level of enrichment.

Kamalvandi, meantime, said that Iran was not in need of 20% enriched uranium for Tehran research reactor to produce radio drugs for the time being, noting, "We have the needed fuel for several years and are not concerned about the fuel."

Asked about the heavy water reactor in the Central city of Arak, he said that Iran could revive the reactor which was sealed after the nuclear deal but preferred to have a new reactor.