Iran has required resolve, power to answer any threat

TEHRAN (defapress) – Seizure of the British-flagged oil tanker in the Persian Gulf proved that Iran has the necessary determination and power to respond to any sort of threat, said Iranian Defense Minister “When they [the UK] wrongly seized a tanker laden with Islamic Republic’s oil, we immediately confronted their illegal action in the Persian Gulf and this means that we have the resolve and power that are needed to respond to any threat,” he said Monday in a local event in Tehran.
News ID: 78143 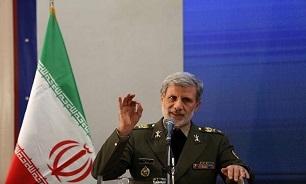 Upon the request of Iran’s Ports and Maritime Organization, IRGC seized British-flagged Stena Impero on Friday in the Strait of Hormuz since the vessel had switched off its transponder and moving in the wrong direction, increasing the risk of collision with other ships.

Iranian Armed Forces are capable of producing state-of-the-art radar systems and smart weapons, he said, highlighting that the downing of the intruding US drone displayed a small portion of Iranian forces’ vigilance and readiness.