TEHRAN (defapress) – All the crew members of an Iranian cargo ship bound for Russia that sank in the Caspian Sea off the coast of the Republic of Azerbaijan have been rescued, Iran’s ambassador to Baku said.
News ID: 78190 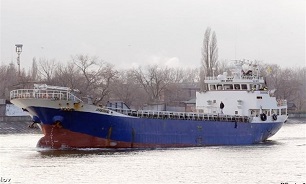 Iranian ship ‘Shabahang’, which was carrying a 900-ton cargo of tiles and ceramics, had left Iran’s northern port city of Anzali and was traveling to Russia’s Makhachkala when it sank in Azerbaijan’s territorial waters on Friday.

The ship sent a distress signal near the Azeri port of Lankaran after it was involved in an accident.

All crew members of the cargo ship, including 7 Iranian and 2 Indian sailors, have been rescued by Azerbaijan’s forces and transferred to capital Baku, Iran’s Ambassador to Azerbaijan Javad Jahangirzadeh said.

The envoy said the doomed ship had passed technical checks before the journey and received the required permission, noting that the authorities need to explain how the incident happened.