TEHRAN (defapress) – Iranian First Vice-President Eshaq Jahangiri said nobody could violate the country’s border, warning against a crushing response that aggressors have to receive from the Islamic Republic.
News ID: 78326 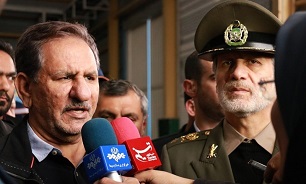 He also noted that Iran’s decisive reaction to border violation has been already shown, when a big power like the US violated the Iranian airspace and received a harsh response from the Iranian Armed Forces.

In June, the Islamic Revolution Guards Corps (IRGC) Aerospace Force’s air defense unit shot down a US spy drone that had violated the Iranian territorial airspace in the southern province of Hormozgan.