Politician Blasts US Lack of Assistance to Iraq in Controlling Borders

TEHRAN (defapress)- Former Iraqi Deputy Health Minister and politician Hakim al-Zamili said Washington has avoided support for Iraq in the fight against terrorism and controlling the borders, while Iran was the first to rush to Baghdad's aid.
News ID: 78589 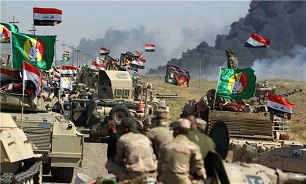 The Arabic-language Soumer News quoted al-Zamili as saying on Tuesday that the US has not acted upon its agreement with Baghdad and did not help Iraq establish security at the borders and battle against the ISIL.

He added that the Americans for two years dragged their feet in giving a response to Iraq's needs, noting that it was Iran which rushed to arm and support Baghdad.

"Iran has played a big role in Iraq's fight against the ISIL," al-Zamili said.

Iraqi officials have always appreciated Tehran for its prompt assistance to Baghdad in hard days when the country had just come under terrorists' attack.

In a relevant development in March, two former prime ministers and the current National Security Council advisor of Iraq went to Iranian President Hassan Rouhani’s residence in Baghdad to voice their gratitude for all Tehran’s supports in the Arab country’s war against terrorists.

During the meetings, in the palace located in Dar Dhiafa in Baghdad, the Iraqi officials appreciated Iran's support for Iraq's combat against the ISIL terrorists.

Also in these meetings, the two sides exchanged views on methods to expand relations between Iran and Iraq.