CNN Poll: 6 in 10 Say Trump Does Not Deserve A Second Term

TEHRAN (defapress) – Six in 10 Americans say President Donald Trump does not deserve to be reelected, according to a new CNN Poll conducted by SSRS, and more now say he's doing a poor job than a good one of keeping important campaign promises.
News ID: 78672 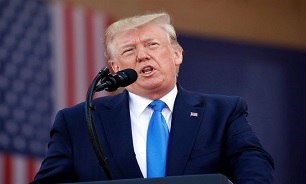 Overall, the poll paints a picture of a President who has done little to improve negative impressions of him or his work during his time in office. Across several questions asked early in Trump's time in office and asked again now, the poll finds little positive change and deep partisan polarization.

The 60% who say the President does not deserve to be reelected is similar to the 63% who felt that way in November 2017. That outpaces his most recent predecessors at a similar stage in their presidencies. In October 2003, a CNN/Gallup/USA Today poll found that 52% of Americans thought George W. Bush did deserve reelection, and Gallup's polling in 2011 found the share saying Barack Obama did not deserve to be reelected stood in the low 50s.

The President's approval rating remains about where it was in mid-August, with 39% approving of the job he's doing and 55% disapproving. Although any change in the last few weeks has not been large enough to be statistically significant, his disapproval rating is the highest it's been since early February, with approval the lowest since January.

Trump's approval ratings for handling major issues are largely stagnant, with what little movement there is heading in the wrong direction for the President. His approval rating for handling the economy has dipped below 50% for the first time since early this year, and his ratings have worsened at least slightly on foreign trade, foreign affairs and environmental policy.

The President's approval rating for handling immigration has held roughly steady, but the 59% who currently disapprove is numerically the highest since just before last year's midterm elections. A majority (52%) say Trump's policies on immigration do too much to limit immigration to the US, 24% consider them about right and 20% say they do not go far enough.