TEHRAN (defapress)- The American officials had claimed that a hot summer is waiting for Iraq and the recent unrests in the country can be seen to be in line with the same schemes, a Lebanese newspaper wrote, adding that the Iraqi government had prepared special plans to counter them.
News ID: 78907 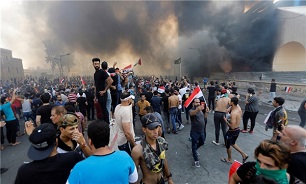 Security sources told the Arabic-language al-Akhbar newspaper that most people in the recent unrests in Iraq were peacefully shouting their demands while a number of others were after sabotage acts and suspicious plans to turn the scene into violence and chaos.

They added that the US plot to foment chaos in Iraq was disclosed to the intelligence bodies since three months ago, noting that Washington and its allies were due to organize protest rallies under the cover of popular demands and lead it towards unrests and then introduce a popular military commander to lead the so-called salvation government so that the US can strengthen its hegemony over Iraq.

An Iraqi security source told al-Akhbar that the Americans had in mid summer 2019 warned of a hot summer to change everything in Iraq to, in fact, damage Iran's reputation in the Arab nation, adding that they spent the summer for preparations and implemented their plots in a "hot fall".

He added that Iraqi Prime Minister Adil Abdul-Mahdi implemented a counterplan to foil the Americans' plots which includes controlling the security and military bodies, controlling the field situation in 18 Iraqi provinces, state plans and initiatives which can calm people and meet their demands and encourage support for peaceful protests within the framework of law.

The security source said that at present the situation in many Southern Iraqi cities is under control and some sporadic moves are seen in Baghdad and Dhi Qar provinces.

Qais Khazali, the Leader of Asa'ib Ahl al-Haq Resistance Movement, revealed, in a press conference more than a month ago on August 26, that some political fractions in Iraq in a joint endeavor with some foreign powers are getting prepared for igniting demonstrations, because they are unhappy with Iraq’s current foreign policy.

“The problem is the ‘Deal of the Century’. They are after making the current administration abide by their demands…. Accordingly, we will witness new demonstrations in Iraq. The demonstrations are scheduled to begin in the tenth month (October). If you liked, record these words of mine. This is not my analysis; it is the information and intelligence I have. They also start with social media to pretend it is public opinion, but in reality they are being led by foreigners,” he said.

Also on Wednesday, Lebanon’s al-Akhbar newspaper disclosed that Saudi Arabia had handed a plot to the administration of US President Donald Trump to stir unrest in Tehran, Baghdad and Beirut. It shows that the three countries of Iran, Iraq and Lebanon are the main targets of the project which is aimed at stimulating the public opinion through the media in order to instigate street protests which would finally weaken the central government. The Arabic-language al-Akhbar newspaper went on adding that After Saudi Crown Prince Mohammad bin Salman managed to coerce Head of MBC's television network Walid Ibrahim to give in part of the shares of the MBC, through putting him behind the jail, bin Salman gained control over the MBC’s board of directors, injected $100 million into the network to spend it against target audience in Lebanon, Iraq and Iran. Many may have not noticed that there were several rallies in Lebanon concurrent with protests in Iraq, but they failed to attract attention similar to what demonstrations in Iraq did. This remarkable synchronization will be noted by shrewd analysts.

Now, the Saudi plot is being materialized in Iraq, and that is why there is no internal political leadership heading it which makes it seem as if the protests were popular and spontaneous while the plot is riding a wave of economic discontent. The current situation in Iraq is very similar to what was supposed to become nationwide in Iran in late 2017 and early 2018. Both of these cases of protests claimed popularity and independence from any political leadership, and at the same time were heavily dependent on arrangements made and announced on social media.

Both senior Iraqi cleric Seyed Muqtada al-Sadr and Ammar al-Hakim (the former Leader of the Islamic Supreme Council of Iraq) have sought to take the lead, but were pushed back by demonstrators.

The US, Saudi, Israeli embassies and governments have thrown their weight behind the protests, raising suspicions of their involvement to yet another level.

New analyses reveal that 79% of hashtags about protests in Iraq on Twitter originate from Saudi Arabia and only 6% are from Iraq, in a stark contrast with claims that the recent days’ demonstrations are popular and spontaneous.

Iraq has been rocked by a new wave of protests over economic hardships and joblessness since October 01.

However, the timing of the start of the protests with the great march of Arbaeen arouse suspicions, as new findings show that Riyadh is resorting to the cyber space where it is stimulating the public on social media platforms.

A new analysis, released on Thursday, shows that, despite all the claims which try to frame the recent unrest in Iraq as a popular movement with no political intention or affiliation, only 6% of the calls for street demonstrations originated from Iraq and the dominant majority belonged to Saudi Arabia where almost 80% of the social media content is devised and posted.

It is not a new revelation that Saudi Arabia uses dozens of Twitter bots whose job in massive scale is to call protesters to join violent street rallies.

Even the volume of hashtags sent from Kuwait is bigger than Iraq, and 7% of pro-protests tweets are from the tiny Arab country in the South of Iraq.

The UAE, Egypt, the US and Yemen are the other countries which originated the tweets promoting anti-government protests in Iraq.