TEHRAN (defapress)- The Israeli occupation forces (IOF) killed a Palestinian citizen and wounded dozens others on the 77th Friday of the Great March of Return in the Gaza Strip.
News ID: 78910 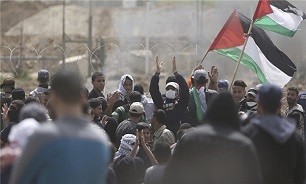 It added that 54 Palestinian protesters were injured by IOF live ammunition and tear gas bombs in different areas along the border between the Gaza Strip and the 1948 occupied Palestinian territories.

The Gaza Strip Palestinians launched the Great March of Return in late March 2018 to defend the refugees' right to return and demand an end to the 13-year-long blockade on the coastal enclave.

Since the border protests started the IOF has killed 325 Palestinians, including children, and injured over 32,000.