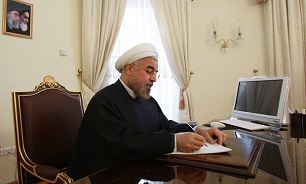 “This gathering demonstrated, more than ever, that Arbaeen is not just a calendar event; rather it is a lasting historical miracle and the most powerful media to introduce the culture of Imam Hossein and the Ashura uprising,” he noted in the message.

He went on to say that this year’s Arbaeen which was held with millions of Muslims in participation sent a message of 'freedom' to all the world.

Rouhani noted that the event was a demonstration of ‘unity’ especially between people of Iran and Iraq and that it has created a unified front against ‘tyranny, discrimination and violence’.

He went on to appreciate all the officials, Marja's, and people of Iraq for hosting millions of pilgrims from Iran and other countries during the past two weeks.

Millions of Muslims from across the globe attended mourning processions of Arbaeen in Karbala on Saturday. The occasion marks the anniversary of the 40th day after the martyrdom anniversary of the third Shia Imam, Imam Hossein, and his 72 companions who were martyred during the battle of Karbala some 14 centuries ago.

Every year on Arbaeen, an average number of 20 million pilgrims from across the world beat long distances on foot to converge on the holy shrine of Imam Hussein in Karbala, making it the largest human gathering in the world.