TEHRAN (defapress)- Iranian President Hassan Rouhani said that the US embassy takeover by students in 1979 was in line with his compatriots’ struggle for winning independence from Washington’s interference in their country.
News ID: 79196 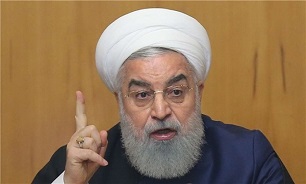 Speaking in a cabinet session on Sunday afternoon, a day ahead of the 40th anniversary of the US embassy takeover in Tehran by students on November 4, 1979, President Rouhani said that November 4 marks the participation of the Iranian students in the overall movement of the Iranian nation towards independence.

He added that the occasion shows that the Iranian students vigilantly chose the justice-seeking path, saying that the embassy takeover was a reaction to the US intervention in Iran's internal affairs as it had done during the 1953 coup.

The president further recalled the US re-imposition of sanctions on November 4 last year, noting that the US sanctioning policy against Iran has failed.

He added that Americans must have realized they are not following a winning path through the sanctions.

Every year on November 4, Iranians from all walks of life hold nationwide rallies to mark the anniversary of the 1979 takeover of the United States Embassy in Tehran by a group of students.

The students believed the US Embassy had turned into a “den of espionage” to overthrow the nascent Islamic Republic establishment. Documents found later at the compound corroborated their claims.

Subsequently, 52 US Embassy personnel were held in Iran for 444 days. They were released the day after the signing of the Algiers Accords, just minutes after the new president, Ronald Reagan, was sworn into office.

On April 7, 1980, the two sides broke diplomatic ties, and on January 20, 1981, signed the Algiers Accords. Among its provisions, it was stated that the US would not interfere in Iranian internal affairs; the US would remove a freeze on Iranian assets and trade sanctions; and Iranian debts to US institutions would be paid.

Washington never implemented the provisions. Quite the opposite, the Congress did (and continues to) ratify bills for the so-called regime change in Iran, while raising the stakes with sanctions and beating the drums of war. It’s the reason why after all these years Supreme Leader Ayatollah Seyed Ali Khamenei maintains, “Tehran doesn’t trust Washington and sees no benefit in resumption of ties.”