TEHRAN (defapress)- Iranian Foreign Minister Mohammad Javad Zarif, in a meeting with his Omani counterpart Yusuf bin Alawi in Tehran on Monday, once again reiterated that Tehran is serious in its call for talks with all the Persian Gulf littoral states.
News ID: 79457 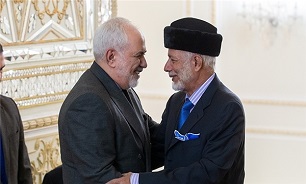 Zarif and visiting Omani Foreign Minister Yusuf bin Alawi held a meeting today in Tehran where the Iranian foreign minister underscored that his country is serious in its call for talks with all countries of the region, reminding that the Hormuz Peace Endeavor (HOPE) was proposed for this cause.

The Iranian diplomatic chief lauded Muscat for playing a good and constructive role, and then said that bilateral relations between Iran and Oman are enjoying a good level of intimacy. He underlined that Tehran welcomes further expansion and deepening of ties with Muscat.

The two sides exchanged views on a broad spectrum of issues of bilateral, regional and international interest.

Political, economic and scientific cooperation in bilateral and multilateral platforms were also discussed in the meeting.

The Omani Foreign minister, for his part in the meeting, highlighted that the current situation in the region requires dialogue and further efforts to reach mutual understanding.

“Holding a comprehensive and encompassing conference with all beneficiary states present can contribute to this cause,” said bin Alawi.

Last month, Iranian Foreign Ministry Spokesman Seyed Abbas Mousavi said that after his country sent details of Tehran’s peace initiative, dubbed as Hormuz Peace Endeavor (HOPE), to all beneficiaries in the region, including Saudi Arabia and Bahrain, positive responses have been sent back.

The Hormuz Peace Endeavor, or HOPE initiative, which was first proposed at the UN General Assembly in New York by President Hassan Rouhani, has been sent in full details to all beneficiary countries, including Saudi Arabia and Bahrain, and we have received good reactions, Mousavi said on November 10 in Tehran, during his weekly presser.

The diplomat added that there will be no further details disclosed, reassuring that further examinations are underway inside the country.

He further voiced hope that the “benevolent step of the Islamic Republic of Iran will be welcomed by these countries to have a safe region” in the future.

On November 09, Iranian Deputy Foreign Minister Seyed Abbas Araqchi touched upon HOPE initiative, and said that Tehran believes in collective security and security for all.

Speaking to Aljazeera while in Qatar to attend the 2019 Munich Security Conference (MSC) in Doha, Zarif once again invited the regional countries to join the Iran peace initiative, dubbed as Hormuz Peace Endeavor (HOPE), as outlined by the President Rouhani at the UN General Assembly meeting.

The top Iranian diplomat also warned the United States that a war would benefit no one, while underlining that the US President Donald Trump cannot impose a unilateral agreement on Iran.

In relevant remarks in September, Zarif had underlined that the Hormuz Peace Endeavor (HOPE) floated by Iranian President Hassan Rouhani at the UN was vital to prevent war and terrorism in the region.

Zarif made the remarks, addressing a meeting of United Nations Security Council on “UN Cooperation with Regional Organizations” in New York late in September.

He urged the countries in the region to join HOPE initiative which is designed to include all countries of the region and aims to expand cooperation beyond regional security.

"The Initiative is based on the fact that all regional states are duty-bound to ensure peace, stability and prosperity in the region. They along with the global community have common interests in maintaining freedom of navigation and transfer of energy," Zarif said.

The Iranian diplomat stressed that regional cooperation is the key for preventing war, violence, extremism, terrorism and sectarian tensions.

Commenting on objectives of Hormuz peace initiative, he said that promoting solidarity, mutual understanding and peaceful and friendly relations and cooperation among regional states as well as boosting collaboration in uprooting terrorism, extremism and sectarian tensions and making sure about energy security, freedom of shipping and free flow of oil were among the objectives of the initiative.

Zarif went on to say that regional cooperation was necessary for fighting terrorism, particularly in areas such as the Middle East and Afghanistan where terrorist groups are more active than any other places.

Addressing the UNGA late last month, President Rouhani unveiled Iran's new initiative for the establishment of peace and security in the Persian Gulf and the Strait of Hormuz, and said, " The goal of the Coalition for Hope is to promote peace, stability, progress and welfare for all the residents of the Strait of Hormuz region, and to enhance mutual understanding and peaceful and friendly relations amongst them."

"This initiative includes various venues for cooperation, such as the collective supply of energy security, freedom of navigation and free transfer of oil and other resources to and from the Strait of Hormuz and beyond," he added.

"The Coalition for Hope is based on important principles such as compliance with the goals and principles of the United Nations, mutual respect, equal footing, dialog and understanding, respect for territorial integrity and sovereignty, inviolability of international borders, the peaceful settlement of all disputes, and more importantly, the two fundamental principles of non-aggression and non-interference in the domestic affairs of each other. The presence of the United Nations is necessary for the creation of an international umbrella in support of the Coalition for Hope," President Rouhani underlined.