TEHRAN (defapress)- A bipartisan pair of senators is urging the administration of President Donald Trump to impose sanctions on Turkey after it tested a missile defense system it bought from Russia.
News ID: 79468 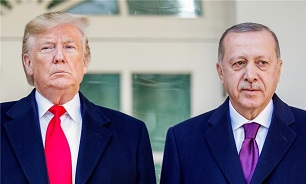 Sens. Chris Van Hollen (D-Md.) and Lindsey Graham (R-S.C.) penned a letter to Secretary of State Mike Pompeo Monday warning him that the “time for patience has long expired”, The Hill reported.

“It is time you applied the law,” Van Hollen and Graham wrote, adding, “Failure to do so is sending a terrible signal to other countries that they can flout US laws without consequence.”

At issue is Turkey’s purchase of a Russian S-400 air defense system. Ankara defied Washington warnings of the system’s incompatibility with the US-made F-35 fighter jet, as well as threats of sanctions, and took delivery of the system in July. In response, the Pentagon kicked Turkey out of the F-35 fighter jet program.

But doing business with Russia’s defense industry is also supposed to trigger sanctions under a law known as the Countering America’s Adversaries Through Sanctions Act, a penalty the Trump administration has yet to levy.

“You have previously acknowledged that Turkey's purchase of the Russian S-400 air defense system triggers US sanctions,” the senators wrote to Pompeo, saying, “Specifically, you said, ‘the law requires that there be sanctions. And I’m confident that we will comply with the law, and President Trump will comply with the law’. You were right when you made that statement.”

Graham was among a group of Republican senators who met with Turkish President Recep Tayyip Erdogan at the White House last month. During the meeting, the senators said, they confronted Erdogan about the S-400.

Still, after the meeting, Senate Foreign Relations Committee Chairman Jim Risch (R-Idaho) noted that he did not think it was the right time for the Senate to pass a Turkey sanctions bill, citing his desire to give the administration room to continue negotiations over the S-400 issue.

Graham and Van Hollen are sponsors of one of the bills in the Senate that would sanction Turkey over the Russian defense system, as well as its offensive in Syria against Kurdish forces.

Pompeo stated last week the tests were “concerning”, but that talks with Turkey were ongoing.

Meanwhile, Russia’s state arms exporter, Rosoboronexport, announced last week it hopes to reach a deal with Turkey to supply more S-400s in the first half of 2020.

“Both the administration and the Congress have repeatedly warned President Erdogan that his decision to move forward with the S-400 requires the imposition of American sanctions,” Graham and Van Hollen wrote in their letter to Pompeo, adding, “Despite President Erdogan’s recent visit to the White House, he has given no public indications that he is going to change course.”