TEHRAN (defapress) – Yemeni Defense Minister said that the country will take revenge on the Israeli regime that has participated for years in the invasion of Yemen.
News ID: 79523 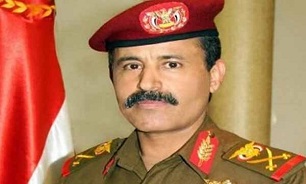 Major General Mohammed Al-Atefi told Almasirah newspaper that the regime in Tel Aviv has participated in Yemen’s invasion from the first day and stressed that Yemeni forces will certainly take revenge.

General Al-Atefi said that the Yemeni Army now has a bank of naval and ground military targets of the Zionist enemy, and we will not hesitate to hit it whenever the leadership decides.

He stated that the Yemeni Armed Forces has completed all aspects of construction that qualify it for a comprehensive strategic attack that cripples the enemy's capabilities.

Al-Atifi explained that the Yemeni military industries are racing against time at a level that rivals countries that preceded them in this field for decades. The Minister of Defense renewed his warning to the Emirates, saying: Our pledge to the UAE remains, and all its conspiracy moves are closely monitored.