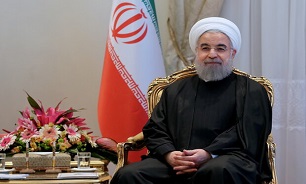 In his message on Monday, President Rouhani offered sincerest congratulations to Kassym-Jomart Tokayev on Independence Day, which marks the 28th anniversary of Kazakhstan’s independence, following the collapse of the Soviet Union on Dec. 16, 1991.

President Rouhani expressed satisfaction over the status of bilateral ties in the past 30 years and hoped that bilateral cooperation would further expand in the coming years.

At the end of his message, the Iranian president wished health and success to Tokayev and prosperity and felicity to the people of Kazakhstan.

28 years ago Kazakhstan became a sovereign state. On December 16, 1991, the Supreme Council adopted the law on the state independence of Kazakhstan. Kazakhstan marks its key national holiday on December 16-17. On the eve of Independence Day, Kazakhstan traditionally inaugurates new social facilities. All the cities hold solemn meetings, as reported by the Kazinform.